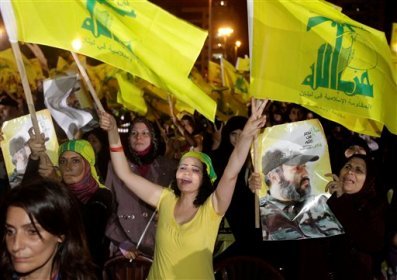 Hizbullah condemned on Friday the assault against a number of residents from the Jabal Mohsen neighborhood in the northern city of Tripoli, saying that criminal gangs bent on creating sectarian strife were behind the attack.

It said in a statement: “The criminal gangs, which are being offered political cover by the March 14 camp, are continuing on driving their knife into Tripoli's bleeding wound.”

“The gangs opened fire at four municipal workers simply because they belong to a sect, which has incurred the wrath of those who claim civility and a love for life,” it added in reference to the Alawite sect, whose members form the majority of the residents of Jabal Mohsen.

“The actions of the criminal gangs do not reflect the national spirit of the residents of Tripoli,” it noted.

“The actions instead represent the great desperation that the March 14 camp has reached due to its failure in banking on changes on the ground. It is therefore taking out its frustration through such barbaric acts,” it added.

Hizbullah voiced its complete solidarity with the victims of Thursday's assault, saying that the whole of Tripoli is a victim of these criminal acts.

It condemned the “mentality of creating incitement that also leans towards extremism and rejects the role of state institutions.”

It therefore called on the state and all of its agencies to assume their responsibilities in ending these criminal acts that are a threat to civil and national peace.

At least three Jabal Mohsen residents were injured in a shooting in Tripoli on Thursday, stoking sectarian divisions in the city.

The state-run National News Agency said assailants shot the three men in their feet in the area of al-Zahriyeh.

I really don't like to hear of anyone being shot or harassed because of their sect, mass blaming and retribution shouldn't be allowed. With that said, Hizballa has some cahonas complaining about covering for these acts when they themselves are covering and protecting the person who is indicted for killing 45 people and wounding hundreds others in a despicable, calculated and planned terrorist attack.can we for a second imagine what it would feel for you to lose one of your sons in the Tripoli bombings, or any other bombing,and knowing that the person charged is free to roam, I would go insane.

I would simply shut up !

yea sorry, they weren't aware that you have the exclusivity on finger pointing, 24/7

says the guy who disfigured our national symbol by painting it to another country's colors. we can see your love of the flag right there.

noticed tony that moowaten defended his militia by attacking you? did he deny that hezbi flag bear a kalashnikov and a koran and pretends that they are not extremists? LOL No
did he deny that hezbis wave a kalashnikov above the name of god and call themselves islamic resistance but pretends they are not islamist eextremists? LOL No

and he dare say they are defending lebanon? LOL what hypocrits these iranian militiamen are....

momo is the head cheerleader of the Ayatollah-Assad-Nasarallah Axis Triangle… he toe's the line, nothing is true until orders come down from Iran and Hizbullah announces it.

It said in a statement: “The criminal gangs, which are being offered political cover by the March 14 camp, are continuing on driving their knife into Tripoli's bleeding wound.”...................
The propaganda machine of HA at full blast. Typical of them, accuse others of what you are guilty of. How about this HA and its supporters on this forum: CAN WE AGREE ON THE NEED TO REMOVE POLITICAL COVER FROM THE CRIMINALS THIS ARTICLE REFERS TO AND THE CRIMINALS M14 AND STL ARE SEEKING (including Ali Eid of course". How about removing political and militia cover? How about removing all militias? I am expecting thumbs down instead of a genuine response from my M8 friends, but I might be surprised.

Everything is changing in Lebanon. The Lebanese are having a hard time digesting the fact that the world does not turn around Lebanon. Lebanon is not the chaise of anything. Lebanon is the result, it shows symptoms of the disease, not it is neither the cause nor the cure. Lebanese have a hard time with this simple fact of their irrelevance

What is a "moderate" sunni? Is it one who is willing to be irans slave? And who is a moderate shia? Is it hezb el shaytan terrorists? Or amals terrorists? Or muqtada sadr? Or the badr brigades? The basij perhaps? If you had any shame in you, you wouldnt beg iran for money while its own people go hungry. No wonder why so many shia iranians hate shia lebanese.

Hi LebPatriot777, I'd love to see you in Iran looking like that. What's with you and Sage, you think that this is a modelling site or have the Israelis taught you how to mould and convince using sex? Listen up deary, spare us the constant barrage of blood thirsty, takfiries and cannibals. Change your tune for once, and maybe the color of your hair, may I suggest 'blonde.

HA has been ordained by Allah to have the exclusive right to hide and harbour criminals. How dare M14 intrude on this God given right.

wat's with these armed farmers spreading terrors accusing others of doing wat they have been doing since their creation?