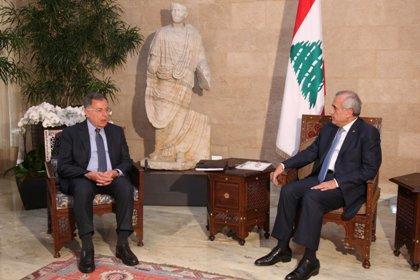 According to the daily, tension escalated between Suleiman and head of al-Mustaqbal parliamentary bloc MP Fouad Saniora after the President voiced consensus over the formation of a cabinet based on 6-9-9 formula, which enraged al-Mustaqbal movement.

The newspaper reported that Suleiman tackled the matter with Saniora during a recent meeting between the two officials, which angered Saniora, prompting him to refute the suggestion.

“Form a government without al-Mustaqbal movement,” Saniora told the President.

Progressive Socialist Party leader MP Walid Jumblat recently proposed the formation of a new cabinet in which the March 8 and 14 alliances would get nine ministers each and six ministers would be given to the centrists – Suleiman, Prime Minister-designate Tammam Salam and Jumblat.

This formula, which Hizbullah agreed on, prevents a certain party from controlling the government by giving veto power to Hizbullah and its team and another veto power to March 14, the Druze leader said.

Salam was appointed in April but has so far been unable to put together a government over the conditions and counter conditions set by the rivals parties as fears mount that the differences between the March 8 and 14 camps would lead to a vacuum the presidential post.

Suleiman's six-year tenure ends in May 2014, but the constitutional period to elect a new head of state begins on March 25, two months prior to the expiration of the president's mandate.

such a cabinet will not see the light of day :)
any cabinet that gives veto power to one confession is not acceptable.
we need a working cabinet and not a cabinet of confessions.

Never ever sit in a governement next to a Hezbollah chabiha. the killers of so many prominent lebanese figures which includes former PM Hariri.

if Sanioura agree to such a governement, he'd be betraying lebanon and its people.

Suleiman, grab salam from his hand and help him form a governement without the actual murderers and thieves and without M14 if it helps.

Yeah just about everyone is tired of M14 ... well, except those on the KSA payroll ...

Yes why m14 when the m8 government is doing so well.

I have a small boat, a big lettuce, a goat and a wolf. I need to cross them to the other side of the river, but I can only carry one at a time, so how do I do it without letting one eat the other? The story of Lebanon's leadership, none better than the other. Just mutually worse, and it looks to remain like this for quite a while.

cedars
m8 government is doing well? Oh my what kind of drugs you taking?

LOL that is funny cedars2

eli-g
its not funny it is rather sad to see someone thinking that the current outgoing gov't is doing well...
sad indeed