Two Die in Egypt Clashes between Police and Pro-Morsi Students 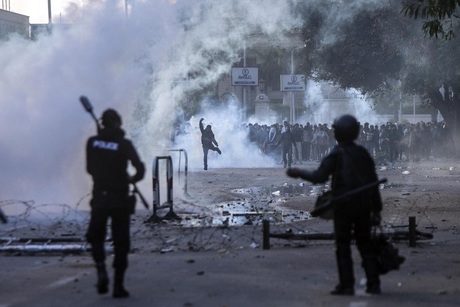 The pro-Morsi coalition spearheading the Islamist protest movement, which has called for nationwide strike action, confirmed two demonstrators were killed.

One of them was shot in the head, security officials said.

State television reported that a policeman had also been shot in the clashes, but was in a stable condition.

Police said they only used tear gas to break up the protests near the defense ministry and accused the Islamists of using arms.

However, the pro-Morsi alliance in a statement accused "militias of the putschist authorities" of killing the two men and injuring three others.

The Brotherhood, to which Morsi belongs, was designated a "terrorist" group last week by the authorities, which accused it of a bombing north of the capital that killed 15 people.

The Islamist movement denied the accusation.

"As the students' strikes succeed in shaking the corners of the coup regime, the coalition of parties, movements and groups defending democracy in Egypt calls for a gradual, decisive nationwide strike," it said.

Police seized an underground press in the Mediterranean city of Alexandria for allegedly printing leaflets against the security forces, security officials said. Two people were arrested.

The Brotherhood's designation as a "terrorist" group carries harsh penalties.

It could mean death sentences for convicted Brotherhood leaders and five years' imprisonment for participants in protests.

Promoting the group either in writing or verbally can also lead to prison sentences.