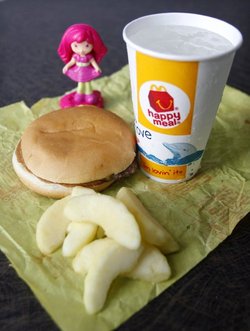 An apple a day may keep the doctor away. But when you put it in a Happy Meal, it might help keep regulators at bay too. McDonald's on Tuesday said that it would add apple slices and reduce the portion of French fries in its children's meal boxes beginning this fall, effectively taking away consumers' current choice between either having apples with caramel dip or fries as a Happy Meal side.

The move by McDonald's, which has become a leader in moving from just burgers and fries to more nutritious fare like oatmeal and salads, comes as fast food chains face intense scrutiny from health officials and others who blame the industry for childhood obesity and other health-related problems. Some municipalities, including San Francisco, have even banned fast food restaurants from selling kids' meals with toys.

Critics wasted no time complaining that McDonald's changes don't go far enough. Kelle Louaillier, executive director of a group called Corporate Accountability International, said McDonald's is just trying to get ahead of impending regulations that will restrict the marketing of junk food to children and require restaurants to post nutrition information on menus, among other changes.

"McDonald's is taking steps in the right direction," says Louaillier, whose group has pushed for McDonald's to retire Ronald McDonald. "But we should be careful in heaping praise on corporations for simply reducing the scope of the problem they continue to create."

Cindy Goody, McDonald's senior director of nutrition, said that the new directives are "absolutely not" related to new regulations. Rather, she said, they're a response to customers asking for healthier choices.

But apparently, customers aren't making those choices in practice. Indeed, only about 11 percent of customers were ordering apples with their Happy Meals, even though 88 percent were aware they had the option, the restaurant said.

McDonald's says the change will reduce calories in its "most popular" Happy Meals by as much as 20 percent. The new apple slices will not be served with caramel dipping sauce.

"McDonald's agrees with leading food and nutrition experts that making incremental lifestyle modifications with food consumption may lead to improvements in an individual's well-being," Goody said, adding that McDonald's didn't eliminate fries from Happy Meals because "all foods fit when consumed in moderation."

Adding a half portion of apples and fries is more likely to change customers' eating habits than simply offering apples as an alternative, said Jonathan Marek, a senior vice president at Applied Predictive Technologies. It should also be a good public relations move, he said, and more importantly, could help drive sales.

"The key is, will this get parents to go to McDonald's one more time each month than they would have otherwise?" said Marek, whose company helps restaurants forecast whether new programs will drive sales. He was not involved in the McDonald's program.

LaMonte Riker, a New York carpenter eating a chicken salad at a McDonald's on Tuesday, doesn't have kids but thinks the Happy Meal changes can't hurt. He also said he doesn't think it's fair for people to blame McDonald's for their health problems.

This isn't the first time the world's largest burger chain has tried to paint itself as an emissary of nutrition.

In the '80s, it created a fitness program for middle school children featuring gymnast Mary Lou Retton. A decade ago, McDonald's used Ronald McDonald to encourage parents to get their children immunized and to tell kids to drink milk. In 2003, it added salad entrees to the menu. And around 2004, McDonald's christened Ronald a "balanced, active lifestyles ambassador."

More recently, McDonald's has worked to portray itself as a healthy, hip place to eat, offering wireless access in restaurants and introducing smoothies, oatmeal and yogurt parfaits, moves that other fast-food companies are now trying to replicate.

"We've been in the nutrition game for over 30 years in providing nutrition information to our customers," said Goody, the McDonald's nutrition director. "Now what we're doing is we're adding more food groups and ... creating nutritional awareness."

McDonald's ability to adjust to customers' demands has helped bring already-loyal customers through the doors more often, but it's also attracting "people who hadn't traditionally visited us in the past," said spokeswoman Danya Proud.