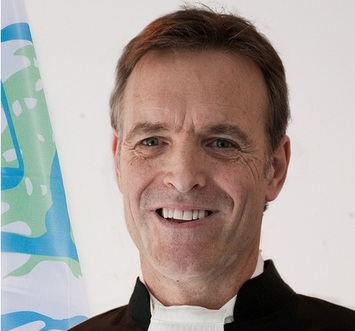 Special Tribunal for Lebanon Prosecutor Norman Farrell has hinted that new sorts of evidence will appear during the trial of four Hizbullah members in ex-Premier Rafik Hariri's assassination case next week.

In an interview with An Nahar daily published on Saturday, Farrell said the details of the evidence will be made public during the opening of the trial next Thursday.

“You will hear more details and you will know that the evidence of telecommunications is not circumstantial,” he said.

Four Hizbullah members - Salim Ayyash, Mustafa Badreddine, Hussein Oneissi and Assad Sabra - will be tried in absentia for the suicide bombing that killed Hariri and 22 others on the Beirut seafront on Feb. 2005.

A fifth wanted suspect, Hassan Habib Merhi, was indicted in October after a pre-trial judge confirmed that he was accused of being involved in the attack.

The STL issued warrants against the four suspects in June 2011, and Interpol has issued a "red notice" for them but none has been arrested so far.

The 2011 indictment against them said the case is built in large part on circumstantial evidence.

It identified five networks of telephones used in the buildup to Hariri's assassination, and set out a detailed account of the days and hours leading to the detonation of 2.5 tons of explosives by a suicide bomber in a Mitsubishi van.

Farrell rejected doubts raised on the evidence, saying there were repeated moves and monitoring by the same people for 50 days.

The Prosecutor reiterated that the indictment of Hizbullah members did not mean that the party was accused of involvement in Hariri's assassination.

Apparently badreddine made extra phone calls after the murder of Hariri which will implicate him and others even further.

He called a child clinic in Dahieh to check up on his mistress. No wonder they attacked the UN investigators when they arrived there,

“You will hear more details and you will know that the evidence of telecommunications is not circumstantial,” he said.

I see a major Hollywood movie coming out based on the events leading up to the STL! Starring Robert Redford as Norman Farrell!

The truth shall set you free.

" has hinted that new sorts of evidence will appear during the trial of four Hizbullah members in ex-Premier Rafik Hariri's assassination case next week."

but... but...M8ers are sure the only evidence the court has is der spiegel article!
oh! they will say it is "fabricated" as usual! LOL

@Game69: Mate, though I can understand your frustration and anger and share in much of it, I very strongly urge you to take a deep breath and refrain from behaving exactly like the people you are condemning. Yes, everybody can behave filthily. But no, you shouldn't play into your enemies' traps and be filthy yourself. Calm down man.
And also, and once and for all already, please do understand that being Shiite does not automatically equate to supporting Hizb or any of its leaders and policies, so if what you care about is Lebanon then do please kindly refrain from insulting our religion wholesale; it's not going to help anything. If you aspire, as I do, to building a more civilized Lebanon, you're not going to achieve much of that dream by being an utter brute. Think on that a little and come back with a cooler head. Cheers.