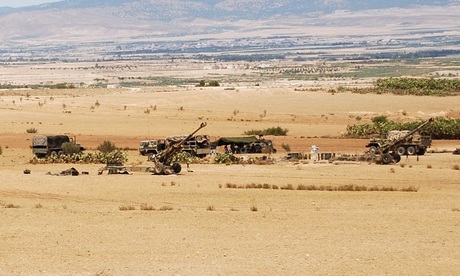 An armed group clashed with Tunisian security forces after attacking their post on the border with Algeria, leaving one of the assailants dead, the interior ministry said on Saturday.

An 18-year-old man was killed and a customs agent was wounded in the attack that took place at the Bouchebka post overnight, said ministry spokesman Mohamed Ali Aroui.

The customs officer was taken to hospital in Tebessa in Algeria, Aroui said.

Aroui said "around 200 people, criminals and thieves, most of whom were armed" with hunting rifles, took part in the attack on the post and "some tried to enter Algeria".

A security official said Algerian troops killed the attacker as he tried to escape across the border.

But Aroui told Agence France Presse he could not confirm this, saying he had no more details on the young man's death.

"Security posts are targeted by troublemakers, and what happened is very dangerous, and it gives an insight into the depth of criminality in Tunisia," he said, calling on civil society groups and political groups to back the security forces.

The attack came hours after prime minister-designate Mehdi Jomaa was tasked with forming a cabinet of independents to end a crisis triggered by the killing of an opposition politician last July by suspected jihadists.