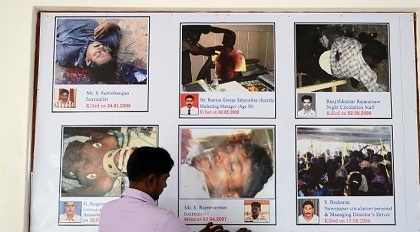 The United States called Sunday for Sri Lanka to investigate rights abuses by security forces after a top envoy completed a fact-finding mission to the island, the U.S. embassy in Colombo said.

"During ambassador Rapp's discussions, he listened to eyewitness accounts about serious human rights abuses and violations of international humanitarian law, including those that occurred at the end of the war," the embassy said in a statement.

During the visit, the embassy sparked fury within the Sri Lankan government by tweeting that army shelling killed hundreds of families in January 2009, the final stages of Sri Lanka's war against Tamil rebels.

A senior Sri Lankan foreign ministry official said the comments were discussed when Rapp called on Foreign Minister G. L. Peiris on Friday but neither side gave details of the meeting.

Sri Lanka has denied charges that up to 40,000 ethnic Tamil civilians were killed by the army during the final push that crushed Tamil rebels.

The foreign ministry official said Colombo believed the U.S. comments were aimed at laying the ground for renewed condemnation of Sri Lanka at the March U.N. Human Rights Council (UNHRC) sessions in Geneva.

The UNHRC is due to discuss two previous U.S.-initiated censure motions against Colombo over alleged violations of international humanitarian law.

Britain's Prime Minister David Cameron warned during a Commonwealth summit in Colombo in November that he would push for an international probe against Sri Lanka unless President Mahinda Rajapakse's government investigated the charges.

Sri Lanka maintains not a single civilian was killed by its troops.

The U.N. estimates the conflict for a separate homeland for ethnic Tamils in the Sinhalese-majority nation cost at least 100,000 lives.

The last sentence is not contested, and occured over a period of thirty years. The figures put out by terrorist sympathisers and the terrorist-loving West however, are.
The penultimate sentence is a lie. The terrorists were not all in uniform, and not everyone in civies was civilian either. There has yet to be a war in which no civilians died. The report by Dr Shanmugarajah, (given under oath, with the help of an independent British lawyer) a Tamil doctor in the thick of the fighting ahould be eye opening for the non-believers should be eye opening. His colleague, another Tamil doctor was imprisoned by the terrorists when he refused to put out false casualty figures.
What is most galling is the that the uncontested biggest criminal of today is seeking to point fingers at a small nation which managed to free itself of terrorism, and was on record having been commended at the time by the very same source for the manner in which it was carried out.

Don't force us to be create Sinhalese suicide team

Peace loving people are urging US to probe the atrocities committed by the US in Iraq,Afghanistan and Libiya.

It is very obvious that US is taking the side of the terrorists meantime banning this so called LTTE in US.Present diplomats are not capable of proper approach to a problem.Instead you send you diplomatic CIA on a fact finding trip to make wrong decisions. Figure 40,000 came down from 140,000 within 3 years.If a single Tamil had stated that their lives have improved after crushing this ruthless terrorists is a miracle.Why is that USA wants to work with bogus priests , lobbyists, and LTTE diaspora rather than using your proper channels or people who are on ground.Why always a double standard. Where was human rights when LTTE was bombing innocent Civilians.