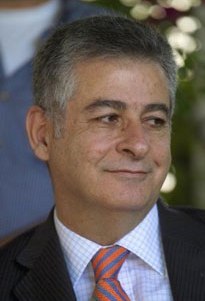 The military court postponed on Thursday the trial of Brig. Gen. Fayez Karam to Aug. 30, after the prosecution demanded reports about his health condition.

In July 2010, the Intelligence Bureau arrested the retired general, a senior member of the Free Patriotic Movement, on suspicion of spying for Israel.

Karam’s lawyer Cinderella Merhej told OTV that the trial delay was “not expected.”

“The legal path states that the court was postponed for two reasons: the first is the Intelligence Bureau request from the court to submit the voice records and the second is the demand from Dahr al-Basheq hospital to submit Karam’s health report,” the lawyer said.

However, the lawyer added that “the judge read a document issued by the Intelligence Bureau stressing that there are no voice or visual records” connected to the case.

Merhej described the postponement as “unjustified.”

Asked about FPM leader MP Michel Aoun’s stance on the case, she replied:” He didn’t warn of any postponement … but he considered it deliberate, hoping that this would be the last trial session.”

The lawyer said that the MP will later will announce his position on postponement.

Karam graduated from the military school in 1972 as lieutenant.

He held several leadership positions in the army, including head of the counter-terror and spying bureau.

He remained in his post until the Israeli invasion of Lebanon in 1982 and his imprisonment in Mazze for five months.

Karam quit the military after Aoun was exiled to France in 1990.

He returned with him to Lebanon in 2005 when Syria withdrew its troops from the country, ending its 29-year hegemony.

The man confessed to receiving money from a Mossad agent in Cyprus claiming it was a loan...... ! What a joke.

General Karam 's case will be a huge scandal for Hariri & co , Mirza , Rifi , al hassan , Siniora and all the many others . We can very easily wait till August 30 th , we waited 20 years to overthrow the hariri system , we can wait 30 days to wipe them out from Lebanon and the third Republic for good .

Le Big Phlegm,
I find your babbles amusing and entertaining, but you must be as smart as a #2 pencil to even try to connect them dots.

Here's a piece of advice, Phlegm: Focus on your high school, lest you'd be a juvenile delinquent wasting time in the Dahieh internet cafes.

Now for the grown ups:
Hezbollah, the Aouni's and all those who yell "Zionist" at the drop of a hat are the most suspicious.

Alle enemies of the filthy non.Islamic militia are to considered heroes. Set him free