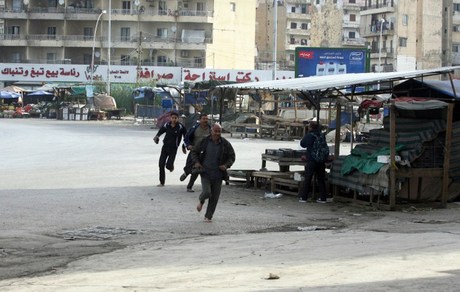 Clashes renewed on Saturday evening on several fighting frontiers in the northern city of Tripoli, as heavy sniper activity was recorded in the region.

The NNA added that intense sniper activity was recorded on the international road that connects Tripoli to Akkar.

“Amy forces responded to the sources of fire, using illumination bombs to locate the positions of snipers and gunmen,” the same source said, noting that tension surged in the region after the eruption of the clashes.

Ahmed Nasser and Ali Qassem were wounded in the overnight clashes on Friday as sniper activity along the international highway in the Tabbaneh and Abou Ali roundabout persisted.

The clashes in Tripoli had renewed in light of the death of Taleb Assi of Jabal Mohsen from injuries he had sustained when unknown assailants opened fire at him in Tripoli's al-Qobbeh area.

How truly sad. I remember the war so vividly as a child. I used to be terrified with all the loud noises of heavy artillery and guns. I can only feel for all the innocent people and mostly the children who should never be subjected to this evil.

I second your sentiments. We need to remove arms from all.

however, since the armed forces do not put an end to the activities of the eid family, I believe the people of Tripoli should once and for all.

hahaha geha, a sad drama eh? so why do you support it?
you know it has nothing to do with the eid family, your friends have been shelling and sniping jabal mohsen ever since the war started in syria, just because it is a mainly alawite enclave. it is people like you and sectarian murderers that the people of tripoli should put an end to.

as usual sectarian mowaten your comment is full of hate and inaccuracies:

- jabal Mohsen is not the only alouite enclave (as you call it), but no one is attacking the villages of alouites based on sectarian ideas.
- eid declared himself as a soldier under bashar assad authority, and bashar declared the same, and they are armed by bashar assad.
- they are accused of the twin bombings at the mosques.
- bombing of Tripoli with heavy artillery is apparently not something you see!

so in my book these murderers should be brought to justice or else.

well of course they need bashar's support, they're surrounded by hateful murderers who attack and snipe them everyday and want to massacre them to supposedly earn a place in heaven...

where did bab el tabbeneh get snipers, guns, RPGs? who do all the fighters answer to? easy to hide behind your finger and point it at the eid family, but unless justice is applied to everyone equally, there will be no justice.

ashraf rifi is the future minister of interior "habboub". i can tell the idea is already giving you an ulcer.

ADP,SSNP,Red knights,Lebanese Baath were trained and armed by rifaat's sarayat difaa during civil war. When syria left, assad kept its agents.Same with turkish alawites of liwa iskenderun or pkk trained in syria. Where do u think jabal mohsen learnt sniping at 500+m with rustic SVD ? On youtube ?

never heard of/seen sniping from tabbaneh(down the hill), they're just shooting hail of bullets.
However, I have heard of one shot/one kill from jabal many times.
Recently a kid on his balcony in Tabanneh was shoot by one bullet at +-500m. I'm member of a rifle club, I can assure u that u need lot of training to shoot at 500+m. U can double-check by asking any soldier...

Seriously all those on this site who generalise are either very ignorant or complete fools or both and peoplepower and flamethrower lead the pack .

from tripoli to saida, from beirut to arsal, sunni blood became very cheap these days...

Numbers and reasons are not the same, dont try to evade the issue.
Shias are killed by bashar's mukhaba rats using car bombs or supplying explosives to any takfiris/desperados like in syria.

"Tripoli is the city of filth .I think the whole area should be bombed"

"gassed, not bombed. the historical buildings are worth preserving."

you are a farsi terrorist germ, and if we lived in a proper country you would be stripped of your nationality and sent to live in Qom with your filthy masters

every day these scum prove that we should have closed the door in their face in 2006. ingrates, traitors, destroyers of society.

Tripoli is the wick of a dynamite waiting to explode, to leave Tripoli's problem unattended means one thing, that one day the situation there could get out of hand and will draw all of Lebanon into war. The army's repeated hesitation, coupled with the political interference with our LAF's workings means one thing, that we shall be once again repeating the mistakes of past, of 1973 and of 1975. We Lebanese are always so close to solutions, but for lack of a strong state, we shall always pay the ultimate price.

it's LAF mistake, some people are benefiting from this chaos...
Sunnis from Tabbaneh asked permission to neutralize scums that attack innocent alawites, LAF refused it...

u're right, only Hizb can be armed.
Do u understand that if an idiot shoot in the air or at jabal, the ADP will shoot back and put in danger anybody in tabbaneh ?
LAF doesnt do its job and doesnt let people defend themselves...

Brother Roar, do you know why I couldn't put my finger on this wound? That's because all sides are interfering with the army's workings, the brutal truth is and remains and will remain for as long as Lebanon wishes to exist in this way, only the Lebanese Forces and the Kataeb keep calling for an army free from interference. I am sorry to be brutally frank, thus not here to please anyone side, Future is my ally as LF and Kataeb, Hezbollah is not my enemy either, but both Future and Hezbollah are impeding the army's working mechanism. Let's leave the army to work without meddling, and Tripoli like all other parts of Lebanon will come to peace.