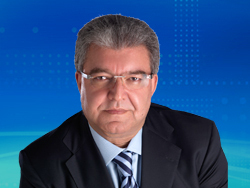 Mustaqbal bloc MP Nohad al-Mashnouq described the government as being that of the suspects in the assassination of former Prime Minister Rafik Hariri seeing as it includes Hizbullah members.

The Special Tribunal for Lebanon released the first phase of its indictment in June, as well as arrest warrants against four Hizbullah members suspected of being involved in Hariri’s 2005 assassination.

Mashnouq told the pan-Arab daily Asharq al-Awsat in remarks published on Sunday: “Such a government cannot be trusted to cooperate with the STL or implement its decisions.”

The MP also defended the STL’s release of the names, photos, and biographies of the suspects, saying it is part of its procedures.

Furthermore, he supported Progressive Socialist Party leader MP Walid Jumblat’s call to tackle the indictment at the national dialogue and the cabinet’s responsibilities towards it.

“The dialogue must be held before Pre-Trial Judge Daniel Fransen takes the decision to release the details of the indictment that will definitely hold facts whose consequences we must cater for before they happen,” Mashnouq stressed.

“Whoever is seeking to tackle any other issues besides the indictment and Hizbullah’s arms is delusional,” he added.

“Political life in Lebanon cannot persist under the threat of the weapons and a vision that incorporates the arms in the state should be reached,” he continued.

“We want the arms to enjoy Lebanese consensus and fall under the state’s authority,” he explained.

“We have the need for a resistance given Israel’s repeated assaults, but it should lie in the hands of the state and not in the control of a party,” said the Mustaqbal MP.

Who is this man ? Mashnouk like Hung !! Let them shut it up for good and go to their country KSA . Hariri era is overrrrrrrr

the free world laughs at the zoo lebanon has become due to morons & bootlickers like Le Phenicien Aka le loser & bigdig aka
small brain.

Oh, go screw yourself, you two-faced creep. If I were Rafic Hariri and were still alive and saw and heard what these opportunists have been saying and doing, I would have killed myself of begged for someone to kill me.

bigdig, accused of meeting Israeli agents, in Cyprus, lectures in patriotism, add to those coward and army deserter and you got Michel Aoun the ally of the mossad infested hezballa.

Lol, this is the same loser who criticized Nasrallah's comments on Bahrain! What a filthy hypocrite!!! ONE WAY TICKET!

A more fitting name for this blob is Nouhad al Maftouq

You 2 are the best ! I think you'd make an awesome couple. Anyway, keep making fools of yourselves, thanks for the free entertainment :)

Le Phenicien and BidDig...I read everyday the news on Naharnet and I also red your posts but I barely comment cause it's so much waste of time to comment to your ignorant posts...seriously don't you work or study or have something to do in your lives? You are 24/7 commenting useless and the most ignorant posts! don't you have a life?!?! I left Lebanon 5 years ago and no wonder the Lebanese community is till being taken backwards with brainwashed people like you...go get a degree, read a book do something to educate yourselves!! Be just Lebanese for one day khaye!

Educated Lebanese, do you realize that you are insulting every person who comments? Surely, you seem very educated! By the way, it took me no more than 3 minutes to browse through the comments and make one of my own.

@educated lebanese - thanks for your post, you just made me crack up thats was hilarious. Inta kteer educated khayee, you shouldn't be on this website. dude has nothing to do with education my friend. this is opinion and everyone is entitled to his or her own opinion, don't show hate amongst your lebanese brothers and sisters, keep the love coming.

“We have the need for a resistance given Israel’s repeated assaults, but it should lie in the hands of the state and not in the control of a party”

Unfortunately the above words will never be understood by the concerned parties as their hearts are filled with enviness and hatred... they just hate us for being wise, mature & true Muslims. The Truth will reveal sooner or later.