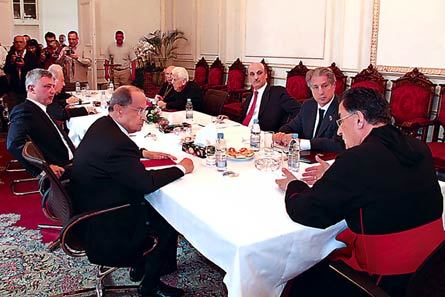 The newspaper said that the expected event would be the second meeting between Phalange leader Amin Gemayel, Free Patriotic Movement chief Michel Aoun, Lebanese Forces leader Samir Geagea and Marada movement head Suleiman Franjieh since the talks they held in Bkirki in April.

Through the August meeting, al-Rahi seeks to find common ground among the March 8 and 14 officials amid renewed tension mainly between Aoun and Geagea, An Nahar reported.

The patriarch is also seeking to put the country’s inter-Christian relations under a single umbrella and guarantee a common viewpoint on diminishing the size of the electoral district.

The first positive answer came from Franjieh, who during his visit to Bkirki on Friday, said he backs any draft law proposed by Bkirki. But it remains to be seen if Aoun, who has the largest Christian bloc in parliament and a big number of ministers in cabinet, would agree to such a proposal.

Al Rahi is no Batrak Sfeir. He tried to please everyone instead of holding to eternal principles and showing courage and determination in front of the criminals and their useful idiots and profiteers that are selling Lebanon's freedom, democracy, sovereignt and dignity to the highest bidder. Can we have Batrak Sfeir Back?

Isn't it simpler and logical to just declare that Dr. Criminal is insignificant and useless? There is no point in inflating a dead political body with fart. Saad Hariri tried and wasted pretty much everything. Be wise and be frank.

kaftafazoul, you are nothing but a syrian Bootlicker,
i hope you pay for your Electricity , bootlicker

Oh so now Al Rahi is not up to your standards! But didn't Doctor Falso warn us that those who thought Sfeir was tough will be shocked by the toughness of Al Rahi. But then Dcotor Falso always knows what he is talking about. Just listen to his daily show. Doesn't he have a long track record of success knowing what he says and does? min addak ya 7akim el falso.