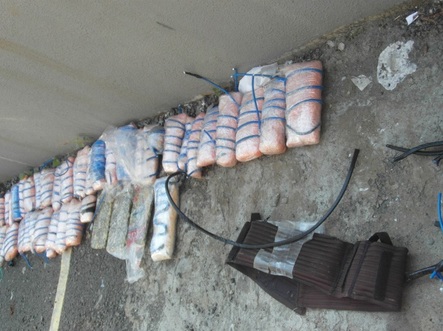 Hizbullah announced on Wednesday its support to the military institution, following the army's latest achievements against “Takfiri terrorism.”

"The army's advanced security achievements adds points to its honorable record,” a statement released by the party said.

"The army is the shield protecting all the Lebanese,” it added.

The statement comes hours after the army announced early on Wednesday the arrest of a Palestinian leader in the Qaida-linked Abdullah Azzam Brigades.

Naim Abbas is described as the group's number two man in Lebanon.

The army also defused around 100 kilograms of explosives, several rockets and explosives belts placed in a black SUV that was parked in Corniche al-Mazraa neighborhood, where Abbas was arrested.

Hizbullah's statement explained: “This step is an indication of the army's dedication, its hard work and its continuous sacrifices to protect the Lebanese people against all the dangers haunting them, especially against the Zionist danger and the terrorist Takfiri threat that is targeting innocent civilians.”

"We call on the Lebanese people, all parties and groups, to support the military institution against terrorist forces that are targeting citizens' security, threatening their future and planting seeds of sedition and strife between them.”

The party also saluted the army's ability to confront “terrorism,” urging the Lebanese to become aware of these dangers, and to “tackle their disputes and unite to save Lebanon from the current storm hitting the region.”

"The army is the shield protecting all the Lebanese,”

if so, then disarm and give the weapons to the army you pretend to praise! LOL
hezbi are true hypocrits...

What a bunch of hypocrites indeed. They are an illegitimate party and put on our soil by the scums of IRAN.

Let me ask why is HA is praising the LAF and in the meantime in Syria fighting along side Assads troop? Who gave them the right to fight in Syria under the name of Lebanon? Scums don't speak for us!

HA praises the army:) Who got us and the army in this mess in the first place!

You are so right

true, we should go after those who invited, funded, armed, and sheltered those terrorists: M14

M14 got involved in the neighbouring conflict long before Hezbollah interfeered. Drop the act, the LAF has done so well and eradicating the takfiris, that they deserve the honor and respect from all Lebanese.

Instead of praising the army for stopping bombs you are attracting. Why not stop the reasons for being bombed in the first place !

The army cannot always be there to defend you from your crimes and their repercussions !

didnt know that was a crime.

Stop being terrorist mercenaries fighting other people's wars under the order of foreign countries.

No one asked them to stop being Shia. I should ask you though to stop being stupid for once and fail to make me appear saying things I never said.

If you have a racist mentality, it doesn't mean your opponents do !

humm.. in that case, how come the takfiris started kidnapping shia pilgrims, massacring shias in border villages, and firing rockets on hermel BEFORE hezbollah got involved?

you try to depict the terrorists as defending themselves, when it's actually they would started killing innocents, and HA defending the said innocents.

The Shia pilgrim issue is an excuse to pull Hezbollah into war. Either HA fell in the trap or HA waited for this opportunity.

You will tell me the ALMIGHTY Bashar who is "winning" the war is unable to handle this on his own ? He can defend all Shiias in Syria with his brave and strong army can't he ?

And I thought HA's involvement in Syria was to "defend Lebanon", not defend Shiias in Syria... but I guess I was wrong ! Like all M8 sheep are wrong about this fake resistance and its agenda.

it's only purpose is to defend the criminal regime of Bashar el Assad in order to ensure their grasp on Lebanon !

nobody called bashar "almighty" except you here. and no the syrian army is not deployed everywhere in syria, they work spot after spot, and many areas are undefended, especially countrysides and mountainous areas. this is why rebels were able to "claim" control of many places and commit massacres before the army arrived to oust them.

So you're saying Bashar is weak and needs Hezbollah :) Hezbollah is not in Syria to defend Lebanon as Nasrallah is lying ! I love it !!! You admit it finally...

you have mental issues. i never said that, but you being delusional and hearing voices is no news.