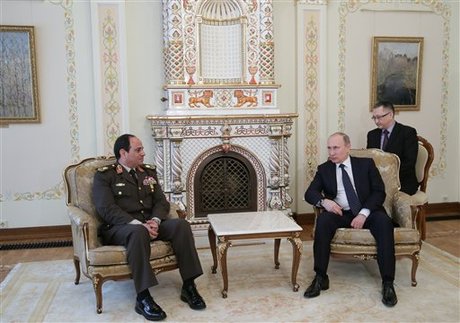 Washington also assured that a warming of relations between Cairo and Moscow wouldn't harm the "historic" ties shared between Egypt and the United States, which have soured in recent months.

"Of course we don't endorse a candidate and don't think it's, quite frankly, up to the United States or to Mr Putin to decide who should govern Egypt," said State Department deputy spokeswoman Marie Harf.

"It's up to the Egyptian people to decide."

Putin publicly threw his support behind Sisi's as yet undeclared presidential bid during talks with the Egyptian defense minister in Moscow.

"It's not up (to) us to endorse a candidate, and really not up to anyone else outside of Egypt to either," Harf told reporters.

In remarks broadcast on Russian television, Putin spoke with Sisi about his presidential ambitions.

"I wish you luck both from myself personally and from the Russian people," Putin said.

The 59-year-old Egyptian field marshal has not actually declared his presidential ambitions but is overwhelmingly predicted to run in elections set to be held later this year, after Islamist president Mohamed Morsi was ousted in July.

Russia -- one of the world's top weapons exporters -- is keen to revive military ties with Egypt, which had been extensive through the 1960s and early 1970s.

Cooperation between the two sides dropped after Israel and Egypt signed a peace treaty and Cairo began receiving generous aid from a United States eager to encourage adherence to the peace deal, secure its own access through the Suez canal and support the most populous Arab country amid the "war on terror."

But Washington ultimately froze a portion of its military aid to Cairo in October as punishment for Egypt's bloody crackdown on Morsi supporters.

"Egypt is free to pursue relationships with other countries. It doesn't impact our shared interests," Harf said, adding that the United States brings "unique capabilities to bring to bear militarily and economically" for Cairo.

It is incredible that the USA has the nerve to say things like that. But then again, the USA and Russia are two sides of the same imperialistic coin, so they can both suck it and stay out of the affairs of everyone else. I'm waiting for the day when all the countries they've ruined and pillaged over the years join together and destroy both.