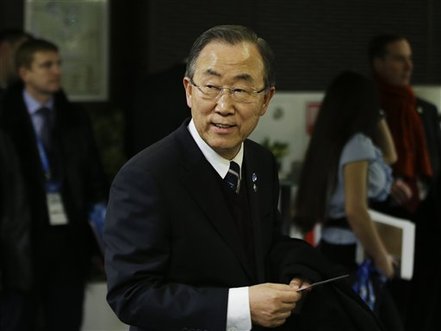 “The political leaders in Lebanon are encouraged to build the constructive engagement which led to the formation of the new government to ensure that the country's forthcoming presidential election is successfully conducted within the timeframe set by law,” Ban's spokesperson in New York quoted him as saying.

“The Secretary-General pays tribute to outgoing Prime Minister Najib Miqati for his leadership,” said the statement.

Ban expressed readiness to “working with the new Government in its efforts to serve the people of Lebanon and to ensure the effective implementation of Security Council resolution 1701 and other resolutions which remain essential to the country's stability.”

Resolution 1701, which ended the 2006 war between Israel and Hizbullah, calls for respect for the Blue Line, the disarming of all militias in Lebanon, and an end to arms smuggling in the area.

He urged Salam's cabinet to act effectively to address the security, humanitarian and economic challenges with the full support of all parties and without any delay.

The Security Council also voiced support to the new cabinet.

“We looked forward to the constructive engagement of the new Government with the international community, in particular the U.N.-backed International Support Group to mobilize support for Lebanon,” a statement pointed out.

The Council also underlined the need for the Government to uphold Lebanon's long standing democratic tradition in particular in ensuring that presidential elections will take place within the constitutional framework.

Since April, efforts to form a government had stumbled over disputes between Hizbullah, whose fighters have been helping the Syrian army crush the revolt, and the al-Mustaqbal movement chief Saad Hariri's bloc which backs the Sunni-led uprising.

Hariri paved the way for the breakthrough when he announced in a U-turn last month that he was willing to allow his so-called March 14 bloc join a government with arch-rival Hizbullah.

The new government brings together for the first time in three years Hizbullah and the Hariri bloc, and the agreed compromise ensures neither side has veto power over the other.

The 24 portfolios are divided into three groups, with the March 14 and 8 alliance each taking eight ministries, with candidates considered to be neutral allocated the remainder.

To preserve the delicate balance between the country's 18 sects, the government is also equally divided between Christian and Muslim representatives.