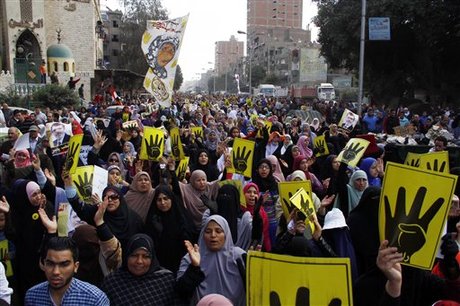 Egypt's deposed president Mohammed Morsi charged he was being muzzled in a soundproof dock at the start of his trial on espionage charges Sunday, as his defense lawyers staged a protest walk-out.

The court adjourned the trial, the third for the Islamist since his July 3 ouster, to February 23 to allow the lawyers' syndicate to appoint new lawyers.

Morsi, who has shouted that he was Egypt's legitimate and elected president in hearings of other trials against him, said the court was trying to silence him.

"We are in a farce, all this because you are afraid of me. You are afraid that the president speaks," Morsi cried out.

"If this farce continues, don't come to the court," Morsi told his defense.

Mohamed Selim al-Awa, a member of the defense team, told Agence France Presse: "We have withdrawn until the court removes the glass cage, we will not get in the room today."

The soundproof dock is designed to stop Morsi and the other defendants from interrupting the proceedings with outbursts. On Sunday, 20 defendants were brought to court, including Morsi, who was placed in a separate dock with a former aide, and the Brotherhood's supreme guide Mohammed Badie and his deputy Khairat al-Shater.

The accused include former presidential aides and renowned political scientist Emad Shahin, who is being tried in absentia.

The latest court case is part of a relentless government crackdown targeting Morsi and his Islamist supporters since he was ousted by the military after a single year in power.

If found guilty, the defendants could face the death penalty.

Morsi, who was Egypt's first democratically elected and civilian president, is already on trial for alleged involvement in the killing of opposition protesters in December 2012.

Along with 130 others, including dozens of members of Hamas and Lebanon's Hizbullah, he is separately being tried on charges linked to a jailbreak during the 2011 uprising that toppled strongman Hosni Mubarak.

The ousted leader also faces trial for "insulting the judiciary". A date for that has yet to be set.

In the espionage trial, the prosecution aims to implicate Morsi in a vast conspiracy involving foreign powers, militant groups and Iran to destabilize Egypt.

The defendants are accused of "espionage for foreign organizations abroad to commit terrorist attacks in the country," a prosecution statement said.

During Morsi's short-lived presidency, ties flourished between Cairo and Hamas, a Palestinian affiliate of the Muslim Brotherhood which rules neighboring Gaza.

But since July, Egypt's military-installed government has accused Hamas of backing Morsi and his Brotherhood and carrying out terrorist attacks inside Egypt.

The army has destroyed several hundred tunnels used to smuggle crucial supplies, including fuel, into the Israeli-blockaded Gaza Strip.

Since Morsi's ouster, his supporters have faced a relentless crackdown by Egypt's government that has left more than 1,400 people dead, according to Amnesty International, and seen thousands more arrested.