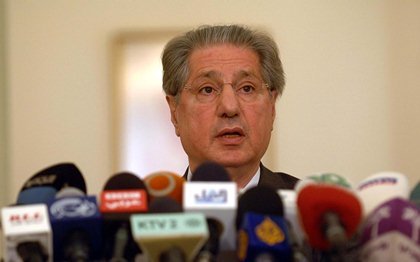 Phalange Party leader Amin Gemayel said on Sunday that the party will not tolerate attempts to undermine Lebanon''s sovereignty, stressing that Hizbullah will be confronted at the cabinet and not by any other means.

“The Phalage party has been demanding the formation of an all-embracing and capable cabinet,” Gemayel said during a press conference in Bekfaia.

He expressed hope that Prime Minister Tammam Salam's cabinet would be capable of meeting all the constitutional deadlines on time.

“We have been waiting for the formation of this cabinet, which was formed after a long period of sufferings, hope that it would meet the aspirations of the people,” Gemayel said.

He hailed the efforts exerted by President Michel Suleiman and Salam to form the government, describing it as a necessity to restore calm in the country.

However, he expected from Salam's cabinet to “consolidated among its components despite the differences to achieve stability.”

“We disagree with Hizbullah but we are not afraid to confront it at the cabinet, the battle should be political and not by the use of arms,” the Christian leader added.

“We are concerned with moving the political battles to the government and parliament,” he stressed.

Gemayel lauded the sacrifices made by head of al-Mustaqbal Saad Hariri and his courageous stances that helped the formation of Salam's government.

Since April, efforts to form a government had stumbled over disputes between Hizbullah, whose fighters have been helping the Syrian army crush the revolt, and Hariri's bloc which backs the Sunni-led uprising.

Hariri paved the way for the breakthrough when he announced in a U-turn last month that he was willing to allow his so-called March 14 bloc join a government with arch-rival Hizbullah.

The new government brings together for the first time in three years Hizbullah and the Hariri bloc, and the agreed compromise ensures neither side has veto power over the other.

The 24 portfolios are divided into three groups, with the March 14 and 8 alliance each taking eight ministries, with candidates considered to be neutral allocated the remainder.

To preserve the delicate balance between the country's 18 sects, the government is also equally divided between Christian and Muslim representatives.

LOL.... Hizb of terror understands only one language.

hezbollah is capable of violence, tremendous violence indeed. but with all Lebanese partners they speak the language of tolerance, patience, openness. Even with those who keep provoking and insulting. Their arms are for defending lebanon, whether against the israeli cancer or the takfiri terrorists.

however, i dont see how any of this is related to gemayel's speech. he wont tolerate an attempt to tamper with lebanese sovereignty? how come he didnt say anything about salam being nominated by saudis? is that what he calls "sovereign"?

if salam was nominated by the saudis, why did your hizb and your shia members of parliament name him as Prime Minister in the consultations?

because as i said, they seek appeasement and take conciliatory approaches. everybody knows salam went to saudi and came back with the nomination. at the time even m14 didnt try to hide it and said he had been approved by saudis.

many within m8 are very angry that a sectarian hater like rifi was named justice minister, a role which, more than any other, should be headed by someone impartial and just. also, alice shebtini being rewarded for freeing tens of israeli spies is a disgrace.
but m14 was determined to either have that or take the country further into chaos, so letting them have that was a sacrifice made for the country's sake.

The only sectarian is you and your boss. Where and how did you conclude Riffi is sectarian? You hate him because he calls it as is. RIffi is not heading an Islamist Shia resistance nor is he in Syria defending shia villages))) You Shia hate every strong Sunni Leader. You hate the ISF because it was headed by a Sunni. Which Prime Minister did you ever like? Salim Hoss,,,LOL. Stop making a fool out of your self and try to paste your propaganda that your hizb is defending lebanon. No body is buying that)

lol popeye thanks for making my point, your comment is utterly, and disgustingly sectarian. "You Shia hate every strong Sunni Leader" >> nice one, i think i'm going to save it :)

as for rifi, you call him strong why? because he continuously failed in his job for years and years? how many of the people behind the 17 assassinations between 2005 and 2007 did he catch? what did he achieve besides mutiny against ziad baroud, arming assir, and inciting fanatics against jabal mohsen?
oh yea, i see why you love him so much: he made hateful speeches against hezbollah.

lol... so why are you criticizing gemayel if you claim your shiite MPs nominated him for reconciliation reasons? You never make sense mowaten-less!)

mowaten-less: any evidence Riffi armed Assir other than your paid propaganda?

@HajjHussen: You know I hold you in such high regard and feel you are one of the very few posters on this site that I genuinely like, but your argument was a bit weak. Please, stay away from sectarian arguments, you are above it all haj:)

@Jaafar: Please, in the spirit of the new government, I ask you not to insult your fellow posters. As a father figure for the young generation you should set an example for others to follow. I am not going to vote you down this time in the hope my action will be an incentive for you to improve your online social skills.

'just look at tripoli and akkar, rifi's regions and see how terrorism is thriving and how the state is absent.'

wow vive la logique, this guy must have very high IQ to come up to such conclusions.

big LOL at your supposed facts anonyme, where di you get them from? care to give a source? (dont run away please!)

cedre: your hypocrisy is laughable, did you ever denounce those who accuse Hezbollah every time there is an incident in their regions? no. so you have no right to whine now, you can't have it both ways.

oh anonyme, you forgot to give me a source! must be the 100th time i ask you for one, and you still never delivered! i'm afraid i'm going to end up convinced you're full of it!

as for you, i dont think you need a link to reinforce your convictions, since you make up fantasies as you go. when you claim only pro-m14 were targeted, if we show you that pro-m8 were also hit, you start inventing made-up scenarios were they were actually secretly m14. lol

as for wissam eid, he never linked hezbollah to the assassination. that is again m14 fiction. nobody knows what the actual findings were. if the man had found what the STL claims to have found, what good would it do to kill him? the STL is much bigger, taking out a "secondary" confirmation would be of very little use, if any.

but if, however, he had found evidence that contradicts what the STL claims, which is very possible because he worked on telecom records that were from much earlier (and possibly before the israel agents edited them), then taking him out would be of paramount importance for the real assassins. think about it.

Flamer has got a serious LF complex ... still hurting from the slap you were told you once received?

Either violence or Farsi

The terrorist party understands only one language. War!

thatisit !! go home and do ur homework !!! U're age is not allowing u to speak about LEBANESE GOVERNMENT !!!

The pen is mightier than the sword. If only they knew its virtues.

I will repeat again and again what I have always said, for every action there is an equal and opposite reaction, kidnap Israeli soldiers in 2006 then you get a war, go into Syrian to defend Assad ruthless iron fist ruling then you get car bombs in Lebanon with both example creating innocent Lebanese citizens getting killed. Everyone agrees with Hizbollah that there are AL-Qeada and Takfiris, but you fight them in a smart way by strengthening/supporting the Lebanese Armed Forces not the Syrian Armed Forces or inflict pain on our entire infrastructure simply by putting the state you live in above other states.

Another thing is when sayed deserts m8 it could mean he he cut a deal with the STL. He had better take care I think.

Another great born poltician from Lebanon, what a great guy with such a sucessful and rich history just remember all the great things we have the freedome we enjoy in Lebanon came from Amin el Jumail yes its a shame we cannot cannonise him!