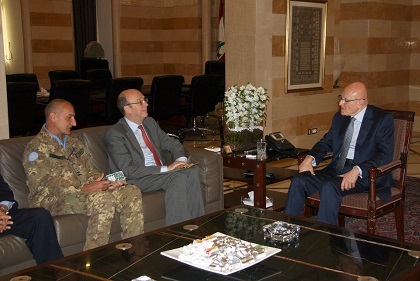 Following the meeting, Serra said: “I was very encouraged by this first meeting with Prime Minister Salam. I was pleased to have this opportunity just days after he assumed office to brief him on UNIFIL’s mission and related developments in south Lebanon.”

He said he informed Salam that “the situation along the Blue Line and in the UNIFIL area of operations remains relatively stable, and that the parties have reiterated their commitment to (Security Council) resolution 1701 and to upholding the cessation of hostilities.”

“I conveyed my particular appreciation for the Lebanese Armed Forces that continues to demonstrate exemplary resolve and professionalism in working with our peacekeepers under very challenging circumstances,” he said.

Serra told journalists that Salam “had strong words of support for UNIFIL.”

“He acknowledged the importance of the work we are doing together with the Lebanese Armed Forces to maintain a safe and secure environment in the South,” the commander said.

Serra told Salam that it was important for the Lebanese government to keep its support for UNIFIL, stressing that the mission stands firm in its commitment to working with the Lebanese authorities in the implementation of resolution 1701.

Plumbly also said that the delegation extended condolences for the victims of Wednesday's double suicide bombing in the Bir Hassan district of Beirut's southern suburbs.

They “reiterated the U.N.’s strong condemnation of such indiscriminate terrorist actions.”

“The formation of a new inclusive government under Prime Minister Salam’s leadership seems to me to send the strongest possible message from all of the country’s political parties that such terrorism is rejected,” he said.