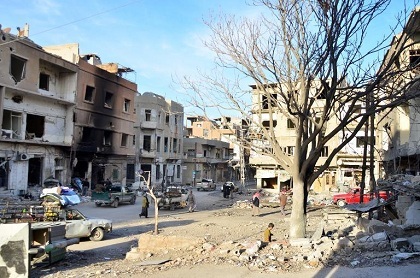 Syrian helicopter gunships killed at least six people Friday when they dropped barrel bombs on the strategic rebel stronghold of Yabrud, close to the Lebanese border, a monitoring group said.

The Syrian Observatory for Human Rights said the attacks followed a string of raids by regime warplanes around the town, which the army is trying to recapture.

The raids came a day after loyalists backed by Hizbullah killed at least 17 Islamist fighters in the battle for Yabrud.

State news agency SANA said army forces carried out a string of operations in and around Yabrud on Friday.

The offensive is aimed at securing the Damascus-Homs highway and severing a key rebel supply line to the town of Arsal in Lebanon's Bekaa Valley.

Hezbollah says car bombs used to attack it inside Lebanon originate in the Yabrud area and are driven to their targets via Arsal, a Sunni town where support for the Syrian uprising runs high.

A group of 13 kidnapped nuns and their three maids are believed to be held in the Yabrud region by kidnappers who took them away from the nearby town of Maalula in December.

Sister Agnes, a nun from their diocese, told Agence France Presse that contact was lost with the kidnappers, who are from the jihadist Al-Nusra Front, on Wednesday.

"They are in a distressing situation and I'm alarmed because I fear the worst," she said by phone.

"They are forced to follow the rebel group that has taken them hostage, which moves them depending on the fighting. We no longer have direct contact with them."

In Lebanon, the army said three rockets fired from Syria struck near the towns of Labweh and Nabi Othman, where Hezbollah wields influence, but caused no injuries.

The jihadist Islamic State of Iraq and the Levant (ISIL) claimed on Twitter responsibility for the rocket fire, which it said was in response to the operation against Yabrud.

In central Homs, the Observatory reported at least 14 air strikes against the areas of Zara and Hosn, while fighting in central Hama province killed 14 loyalists and nine rebels dead.

The forces were killed in fighting for the town of Morek, which is also on a key army supply route and was seized by rebels a month ago.

In the northeast, clashes erupted between government forces and ISIL after midnight around the regime's Base 17 camp near Raqa, the Observatory said.

More than 140,000 people have been killed in Syria since the start of a March 2011 uprising against the Assad family's 40-year rule.

The revolt began as a peaceful protest but escalated into a civil war after the regime launched a brutal crackdown on dissent.