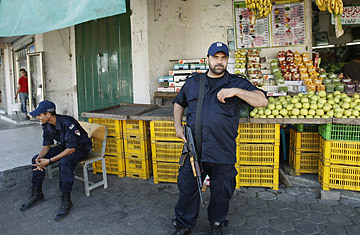 Spokesman Hassan Ahmad told Agence France Presse the arrests on Friday took place at a ceremony in Khan Yunis in the south of the coastal enclave.

"They arrested dozens of people for no reason."

Islam Shahwan, a spokesman for the Hamas interior ministry, said police acted because the meeting organizers had not sought permission.

"Around 20 people were detained and later released after signing a document not to take part in unauthorized meetings," Shahwan said.

Fatah and Hamas, which rule in the West Bank and Gaza respectfully, signed a reconciliation agreement in Cairo in 2011 aimed at ending their political differences.

However, most clauses in the accord remain unimplemented.