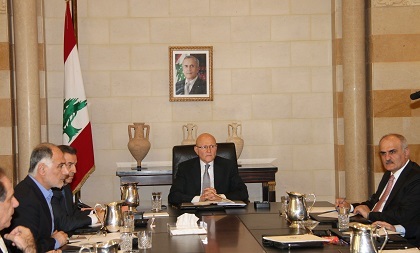 The ongoing dispute over the government's policy statement may force Prime Minister Tammam Salam to refer each of the March 8 and 14 camp's respective drafts to a vote at cabinet, reported the Kuwaiti daily al-Anba on Sunday.

Hizbullah will however reject such a move because of the likelihood that the March 14 proposal will be adopted seeing as the alliance enjoys a greater number of ministers.

Moreover, the ministers loyal to President Michel Suleiman and Salam will likely vote in favor of the March 14 draft policy statement.

Given Hizbullah's fears, Salam proposed that the deadline for drafting the statement be extended by scheduling a session on Tuesday in a hope that the rival parties will agree on a single draft.

The panel has so far failed to agree on a policy statement given Hizbullah's insistence to include the “army-people-resistance” equation in the draft and Suleiman's insistence that it include a reference to the Baabda Declaration.

The March 14 camp has rejected Hizbullah's suggestion, advocating instead the president's position.

In every democracy, When a party or coalition of parties win the elections they form a government and govern until the next elections. National unity governments are rarely formed in peace time as they tend to be unproductive. We have tried this type of government under the threat of arms by the terror party and it yielded no results nor did it address the people's pressing matters. Once again, the terror party shows its lack of adherence to the principles of democracy by refusing to submit anything to a vote. My respect for Geagea increases every minute since he reached the conclusion that democracy and a terror party will never mix.

Good ideas indeed. But for the latter, Lebanon or Lebanese can pressure abroad to encourage a broader ban of the terror party. The solution anyway lies in an articulation of both of these points.

What's the purpose of a government when it cannot apply the basic rule of democracy and that is VOTING to reach a decision. Disgusting...

The Iranian militia will reject anything that interferes with their orders from Assad & the Ayatollah. Their online stooges will cheer them on and spew the usual Zionist/Resistance BS.

just because you say so, it won't make it true.

what s the point then to form a cabinet if they cannot do anything? just to pretend they play by democratic rules?

so each time a law does not please or suit a party they block a whole country...
pity this nation of fools and irresponsible politicians!

Democracy is not words or "worded". Democracy is practice and a culture. It is respecting the wish of the majority, the will of the people through their democratically elected representative, respecting the state and not undermining, submitting to the rule of law and accepting its consequences. Has nothing to do with Shia towns and defense mechanisms!

sure democracy for hezbis is just to preserve their arsenal and power... they do not care about social welfare or improving people daily life and salaries....
and by the way, what is the hezbi program concerning economy, education, social security, environment.... ? nothing!

"Democracy is practice and a culture. It is respecting the wish of the majority, the will of the people through their democratically elected representative, respecting the state and not undermining, submitting to the rule of law and accepting its consequences."

Then how do you explain the M14 boycott except of course to illegally reelect themselves for another 17 months ...

to warrior and popeye;; thank you for excellent posts. I could not add one word to what you both have presented.

Hello the_snore… are you still sitting in your underwear fantasizing about the "brave man of Iran"?

@Popeye
you 3 points suggestion listed above is a non starter
1- They will win militarily
2- This has been done and the result is failure
3- wait for a miracle? ha ha ha this is a joke