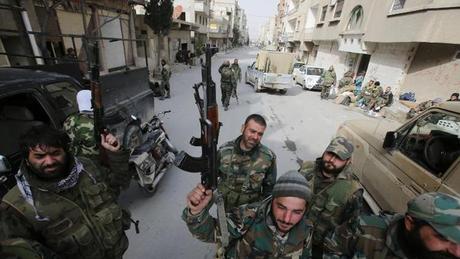 Syria's air force bombarded a suburb northwest of Damascus on Wednesday, killing seven people and violating a truce that had been in place since October, a monitoring group said.

"Seven men have been killed in air strikes targeting the edges of Qudsaya, and an eighth man was shot dead by an army sniper," the Syrian Observatory for Human Rights said.

Among the dead were an unknown number of anti-regime activists, said the Britain-based group.

Rebels in Qudsaya had reached a truce with the regime in October, after which rebels and pro-regime local militia set up joint checkpoints there.

Mohammad Ali, an activist in Qudsaya, told AFP via Skype: "We don't know what's going to happen next. We are in the dark."

He also expressed concern over any further escalation as the truce has allowed thousands of families fleeing other areas of strife-torn Syria to take refuge there.

Amateur video showed a huge plume of smoke rising over the town as the roar of a fighter jet was heard followed by a series of explosions.

Speaking to AFP, a security source denied there had been any air strikes at all.

Farther north, Syria's army backed by Lebanon's Hizbullah and paramilitary forces took over a small village in the Qalamoun area on the Lebanon border, four days after seizing the rebel bastion of Yabrud.

The Observatory also said fierce clashes were raging in nearby rebel-held Rankus.

A security source told AFP the army's goal was to secure the Lebanon border by taking over Flita, Ras al-Maarra and Rankus.

That would seal off rebel supply lines for weapons and fighters, but also crucial routes for food and other supplies to civilians in besieged areas of Damascus province, including Eastern Ghouta, activists say.

On Monday, the Observatory said two children had died in Eastern Ghouta because of food and medical shortages amid dire living conditions caused by the regime siege.

Elsewhere, the army entered Al-Hosn in the central province of Homs and was fighting for control of the famed Krak des Chevaliers crusader fortress, a security official told AFP.

"The army entered Al-Hosn and took two districts of the village. It is bombarding areas around the Krak des Chevaliers to take control of the castle," the official said, speaking on condition of anonymity.

In the south, rebels took control of the central prison in Daraa province, freeing an unspecified number of prisoners.

Speaking to AFP via Skype, Abdullah al-Qarazi, a rebel commander from the area, said the operation "was successful because all the (armed opposition) factions in the area worked together".

In the north, warplanes launched air strikes against several rebel areas of Aleppo, which has come under sustained aerial bombardment since December, killing hundreds of civilians, said the Observatory.

It added that in Hasakeh in the northeast, 20 members of the jihadist Islamic State of Iraq and the Levant (ISIL) were killed in fighting against Kurds.

More than 146,000 people have been killed in Syria's war, and nearly half of the population has been displaced.