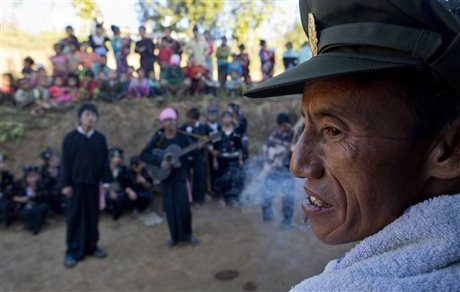 It is the latest flaring of violence in the state, where tensions are running high following several outbreaks of deadly communal violence largely targeting Rohingya Muslims.

He said the aid workers remained under police protection.

The unrest resumed on Thursday as a group of people again "tried to destroy" properties used by aid organisations, a Sittwe resident told AFP by telephone, requesting anonymity, and with shouting clearly audible in the background.

The state remains a tinderbox after festering animosity between local Buddhists and Muslims exploded into bloodshed in 2012, leaving around 140,000 people displaced and casting a shadow over the former junta-run country's much-hailed reforms.

Police said the latest flare-up was triggered by accusations that a foreign employee of Malteser had handled a Buddhist religious flag in a disrespectful manner.

Buddhist flags have been hung across the city as part of protests against Muslims in the run up to a nationwide census this week that many fear could further inflame the situation in Rakhine.

Aid groups have come under increasing pressure in the state, with concerted campaigns by local nationalists who accuse them of being biased towards the Muslim Rohingya, who make up the vast majority of those who lost their homes in the unrest.

Last month medical aid group Doctors Without Borders (MSF) was ejected from the region following a series of protests, leaving tens of thousands of Rohingya in isolated communities reliant on government healthcare -- a shortfall authorities insist they can meet.

At the time experts warned the move may embolden Rakhine hardliners to press for the expulsion of other foreign aid groups.

The Rohingya, referred to by the United Nations as one of the world's most persecuted peoples, are subject to a web of restrictions on travel, work and even marriage.

They are viewed as illegal immigrants from neighboring Bangladesh by local Buddhists and the government, who call them "Bengali".

No one from Malteser was immediately available for comment.