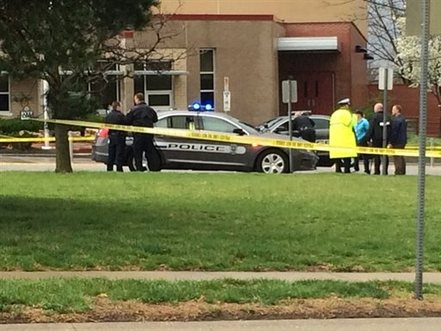 A gunman shot three people dead Sunday at a Jewish community center and a retirement community in Kansas, drawing widespread condemnation and consternation on the eve of Passover.

The 70-year-old white male suspect, who is in custody, was not local and did not know the victims, Overland Park Police Department Chief John Douglass told reporters.

The bearded man used a shotgun in the assault and investigators, who are being assisted by the FBI, are trying to determine whether a handgun and assault rifle were involved.

The suspect was heard yelling "Heil Hitler" as police officers escorted him away at an elementary school, local NBC television affiliate KSHB reported. Douglass refused to confirm the report.

FBI Special Agent in Charge Michael Kaste said investigators were looking into the incident as a "hate crime."

"We haven't ruled out anything," Kaste added.

"I don't want to say the terrorism word; this is three hours into it. It's only wise and prudent we use every resource we have."

Douglass refused to be drawn on whether the "unexpected" shooting was a hate crime, however.

"We know it's a vicious act of violence and you know, obviously, at two Jewish facilities one might make that assumption. We have to know more about it," the police chief said.

President Barack Obama condemned the "horrific" shooting, and pledged the federal government's "full support" in the investigation and to the community.

The initial reports are heartbreaking," he said in a statement offering his condolences to the families of the victims.

Obama also warned that religious violence had no place in U.S. society.

"Nobody should have to worry about their security when gathering with their fellow believers. No one should have to fear for their safety when they go to prayer," Obama said at the White House, a day after the shooting in Kansas.

The president said the shooting was particularly tragic because it came as Jews were preparing to celebrate Passover and Christians were marking Palm Sunday.

He said that the U.S. government would provide whatever assistance necessary to help the affected community, as synagogues and other religious sites hike security measures.

"As Americans... we've got to stand united against this kind of terrible violence, which has no place in our society," Obama said, as he hosted an Easter prayer breakfast.

"We have to keep coming together across faiths to combat the ignorance and intolerance, including anti-Semitism, that can lead to hatred and to violence."

"We condemn the murders, which according to all the signs were committed from hatred of Jews," said a statement from his office, which added that Netanyahu had sent condolences to the victims' families.

"The state of Israel, together with all civilized people, is committed to fighting this pestilence," he said.

The first shooting at the Jewish Community Center of Greater Kansas City took place around 1:00 pm (1800 GMT) as youths auditioned for a play.

Rabbi Herbert Mandl, who serves as chaplain for the Overland Park Police Department, told CNN that the suspect asked people whether they were Jewish before opening fire.

He killed two people there -- one died on the spot and the other succumbed to injuries at a hospital.

The man then got in his car and headed to the Village Shalom assisted living center, where he killed a woman in her 70s about 15 minutes after the first shooting.

In addition to the three people killed, the suspect shot at two other people but missed them.

"Today is a very sad and tragic day and certainly, there are no words to express the senselessness of what's happened this afternoon," Douglass said.

At the Jewish community center, the shooting took place in a parking lot just outside a theater where local media said 75 people, most of them children, were inside.

They had been auditioning for "KC Superstar," a local singing competition based on "American Idol."

The Jewish center said all programs were canceled and it would be closed for the rest of the day Sunday and Monday.

It was earlier placed on temporary lockdown but program participants were later released.

"Our hearts go out to the families who have suffered loss on this tragic day," the center said on its website.

According to the FBI, nearly two thirds of anti-religious hate crimes in the United States target Jews or Jewish sites.

The Council on American-Islamic Relations, a major U.S. Muslim group, said it stood with the Jewish community after the killing spree.

"We are saddened by this vicious act of hatred," CAIR said.

"Americans of all faiths must join together to reject the kind of extremist ideologies that can lead to such inexcusable and unconscionable acts."