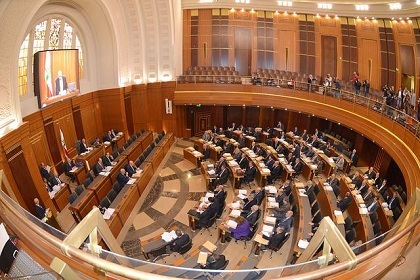 The March 8 camp is preparing a series of “surprises” for Wednesday's parliamentary session to elect a president, reported al-Joumhouria newspaper on Saturday without elaborating.

This does not however include the nomination of Free Patriotic Movement leader MP Michel Aoun, said March 8 sources.

They explained that the camp opted against this option because the lawmaker seeks to be a “consensual presidential candidate among all political powers, while keeping in mind that the March 14 alliance will not vote for him.”

The National Struggle Front of MP Walid Jumblat, as well as MPs Marwan Hamadeh, Antoine Saad, Fouad al-Saad, and Henri Helou, will not vote for him either.

The March 8 camp has therefore chosen the possible nomination of MP Emile Rahme instead of Aoun, reported the daily An Nahar Saturday.

It revealed that Aoun is unlikely to attend Wednesday's presidential elections session “unless an agreement is reached to nominate him as a consensual candidate.”

Change and Reform bloc MP Alain Aoun explained to An Nahar that the FPM is seeking a “productive parliamentary session, not a superficial one.”

Lebanese Forces leader Samir Geagea is so far the only official to submit his candidacy for the elections.

The March 8 camp has not yet announced its candidate.

Media reports had said that Kataeb Party chief Amin Gemayel may be running in the polls, but he is yet to make an official announcement.

Kataeb MP Elie Marouni assured on Thursday that Gemayel is a “natural candidate in the presidential race, because the party sees in him a strong and popular president.”

Perfect choice emile rehmeh will be for the terror party. He is the strong president they claim the christians should have with a lot of popular support. That is their vision for lebanon and for the christians.

This is political maneuvering and posturing; nothing more! My bet is there will be no quorum.

LOL. What else did al Joumhouria report? That Saudi Arabia is a beacon of democracy?

What a thug you are wolf.

What a shock!! Full-Foreclosure coming to the defense of Phoenix the fake! Another M8 butt-buddy!

Emile Rahme! That's tell us how much March 8 are respecting the Christians and taking this election seriously!