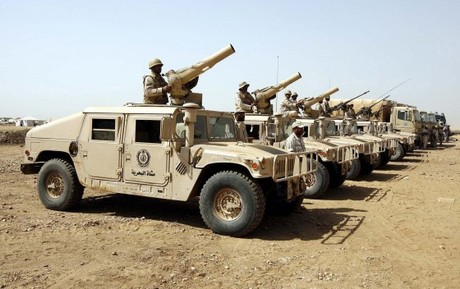 Saudi Arabia ended military exercises Tuesday along the borders of Iraq and Kuwait, as well as other regions, in what the media described as the largest in the kingdom's history.

The armed forces "do not aim to attack anyone as this is not our wise government's policy," Qabeel added.

English-language daily Arab News said "tens of thousands of soldiers, backed by military jets, helicopters and ships as well as tankers and anti-missile systems, are participating" in the "largest military exercise in the kingdom's history."

The operation, in which elite National Guard and interior ministry units also took part, was carried out in the eastern, southern, and northern regions, al-Eqtisadiah website aleqt.com reported.

It "aims at increasing the level of training and testing the capability of our armed forces in deterring any attack from any of these sides," the daily quoted Qabeel as saying.

In 1990, Iraqi president Saddam Hussein's forces invaded and occupied Kuwait. They were expelled the following year in the Gulf War.

Some of the exercises took place in Hafr al-Batin, which borders Iraq.

In March, Maliki charged that Saudi Arabia and neighboring Qatar were supporting terrorism worldwide, which drew harsh criticism from the kingdom, Iran's rival across the Gulf.

In November, Iraqi pro-Iranian Shiite group Jaish al-Mukhtar claimed it had fired six mortar rounds into a remote area of northeastern Saudi Arabia as a "warning" to the kingdom.

Meanwhile, three Saudi soldiers were killed by gunmen who fired from across the border with Yemen to the south, which is frequently crossed by smugglers and by Islamists seeking to join al-Qaida militants in the impoverished nation.

In 2009, Saudi forces fought a war against Shiite Huthi rebels on the Yemeni border.

The rebels, accused by Sanaa of being backed by Iran, frequently clash with Yemeni troops as they try to extend their influence over more areas in the north and towards the capital.