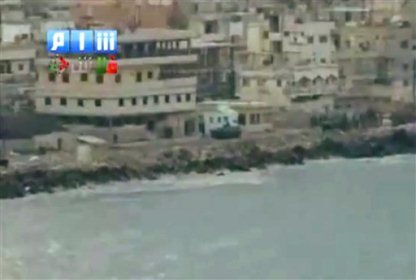 A senior Palestinian official on Monday strongly condemned Syria over violence that forced thousands of Palestinian refugees to flee a camp in the port city of Latakia.

"We strongly condemn the operations of the Syrian forces in raiding and shelling the Palestinian Ramel Camp in Latakia and the displacement of the population," said Yasser Abed Rabbo, secretary general of the Palestine Liberation Organization.

Abed Rabbo made the comments to Agence France Presse shortly after the United Nations Relief and Works Agency, which assists Palestinian refugees, said it believed more than 5,000 had fled the Ramel camp as troops fired at Latakia from both land and sea.

"We consider these actions to be part of the crimes against humanity that have been directed at the Palestinian people and their Syrian brothers who are also the victims of this ongoing bloody campaign," he said.

UNRWA spokesman Chris Gunness told AFP that more than 5,000 people had fled the informal refugee camp in Latakia a day after activists said that Syrian troops began firing at the city from gunships out at sea.

He said the agency was calling for immediate access to the area, but had received no response so far from the Syrian government.

"Thousands of the refugees have fled the camp. There are 10,000 refugees there and more than half of them have fled," he said.

"Some were told to leave by the Syrian security forces, others have gone on their own. We don't know where these people are, how many of them are sick, are dying, are wounded."

Gunness said reports from a "broad range of sources" described attacks on the city both from sea and land.

Syrian activists said that gunboats began an assault on the city with heavy machine-fire on Sunday, the first time the forces of President Bashar al-Assad have attacked from the sea since the anti-regime revolt erupted on March 15.

Dozens of civilians were said to have been killed since the assault began, but the Syrian state news agency SANA denied that naval vessels had opened fire on Latakia, saying troops had fought a ground battle with gunmen in the port city at a cost of two dead and more than 40 wounded in their ranks.