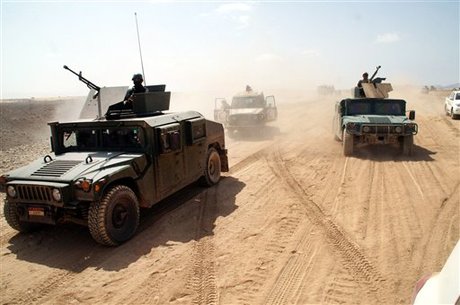 Yemen's armed forces have killed 500 Al-Qaida suspects in an assault on their southern strongholds since the end of April, the army said, even as the network killed 14 soldiers on Thursday.

On the army said, 40 soldiers have been killed and another 100 wounded in the assault in Shabwa and Abyan provinces, during which 39 militants were captured, Colonel Saeed al-Fakeih told reporters.

"We will press on with our war against Al-Qaida, especially in the regions that (militants) fled to," he said.

The army launched the offensive against Al-Qaida in Shabwa and neighboring Abyan in a bid to expel its forces from smaller towns and villages that escaped a previous sweep in 2012.

Troops and militia have entered a string of towns, but analysts say their advances could be the result of a tactical retreat by militants in coordination with local tribes.

The latest setback for the army came on Thursday when Al-Qaida suspects armed with automatic rifles killed 14 soldiers and a civilian in Shabwa, a security official said. Several troops were also wounded.

In Sanaa, Fakeih vowed that "the army will not stand with its arms folded" in the face of the network's attacks.

Acknowledging that his impoverished country "lacks the means needed to fight this global network," Fakeih urged "friends and neighbors to help Yemen in its war on terror."

A "Friends of Yemen" meeting in London in April heard a call by British Foreign Secretary William Hague for donors to back Yemen's efforts to give Al-Qaida "nowhere to hide".

Al-Qaida in the Arabian Peninsula (AQAP) -- a merger of the network's Yemeni and Saudi branches -- is regarded by Washington as its most dangerous franchise and has been targeted in an intensifying drone war this year.

Late on Wednesday, a drone strike killed three Al-Qaida suspects as they were traveling in a vehicle in the Wadi Abida area, east of Sanaa, tribal sources said.

The United States is the only country operating drones over Yemen, but U.S. officials rarely acknowledge the covert operations.

Around 60 suspected jihadists were killed in a wave of strikes against suspected AQAP bases and training camps in mid-April.

The drone program has been defended by both the White House and Yemeni President Abdrabuh Mansur Hadi, in the face of protests by human rights groups over civilian casualties.

Taking advantage of a collapse of central authority during a 2011 uprising that forced veteran strongman Ali Abdullah Saleh from power, Al-Qaida seized large swathes of the south and east.

They remain deeply entrenched in Hadramawt province further east, where they have carried out a series of spectacular attacks in past months.