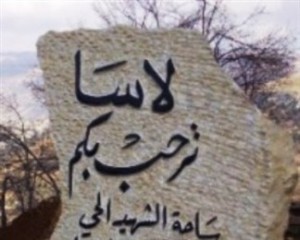 Hizbullah denied on Saturday any connection to alleged construction violations committed in a predominantly Shiite town in Jbeil district.

Sources close to the party rejected in comments published in al-Akhbar newspaper to give the dispute a “political aspect,” saying: “There are attempts to politicize the matter to create rift.”

“They will not triumph,” the sources pointed out.

Mount Lebanon Public Prosecutor Judge Claude Karam launched on Friday a probe into allegations that residents began constructing a building on a property claimed by the Maronite church in Lassa.

The Internal Security Forces stopped a Lassa resident, Yasar al-Meqdad, on Thursday from continuing construction work on the land parcel which is claimed by the Maronite bishopric of Jounieh.

And on Friday, the Prosecutor's office ordered the construction be demolished after al-Meqdad reportedly built a ceiling rather than waiting for a judicial decision on the ownership of the property.

“The matter will be swiftly resolved” by the judiciary authorities, Hizbullah sources told the newspaper.

“We are holding onto our stance and refuse to cover up for any illegal activity.”

According to the sources, “Yasser's documents are legal.”

However, Hizbullah officials contacted Bishop Boulous Andari to stress that the solution should be through the judiciary.

The residents of Lassa have in the past been caught in a land dispute with the church.

Anti-Hizbullah officials accuse the party of allowing the residents to build on church land and providing a cover for the property violators.

Political decision. They give up one of their lawless thugs and gain some political points

There are other ways to rejuvenate the area and help local residence. Land theft and disregarding the Law and threatening the police is not a solution. Unless you don't believe in the state that is.

anything illegal is certainly the work of hizbushaitan.

oh i see you pronounce "hezbollah" like a true israeli

you and anti-HA propagandists make up stories without a single proof, then when HA denies, they are liars. how convenient.

sure they will deny! very bad for their image...

And yet whenever the other side denies the daily accusations of m8 clowns, they are just full of bs.

pierro, u must be a christian takfiri, like geagea, michel kilo, george sabra...LOL

For some reason I doubt HA would get involved in something like this, it might be HA fighters or even the family itself is well known for having a lot of militants. Why don't they just resolve this through paperwork, I mean I can't HA giving cover if the land is actually owned by whoever.

Dear m14ers down thumbing this comment, please go learn sarcasm and smarten up a bit

If you don't own the land you can't build on it your moron!

And Aoun is the Christians' cancer

The day the so called fake resistance proved to be no more than just a militia. It was the day that Hisbollah finally turned it back on the rest of lebanon.

Furthermore, surely HA would not leave their posts in the south to go fight Israel in Jbeil, I mean come on this is the almighty resistance, they do god's work and cleanse the world from the dirty filthy Israeli enemy

Indeed, it was shown on those days that the power of arms is the only ruling authority, well done, well done for taking charge and making Lebanon such a beautiful place to live. I mean since then the economy has been so strong, everyone is working, electricity is abundant, education is sky high, tourism hit the roof, love is in the air and flower power all around. Thank you. Thank you for saving Lebanon, please come again