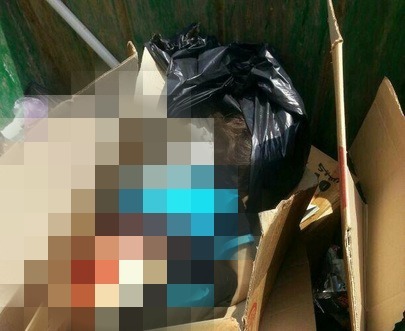 A 17-year-old teenager on Sunday raped a Syrian child, 5, before murdering him and throwing his body in a garbage dumpster in the Akkar town of Halba.

“The Halba police station received a phone call from Mahmoud Aa., who reported that his son N. Aa., 17, had confessed to him that he had killed a child and thrown his corpse in a garbage dumpster near the Halba vocational institute,” said a statement issued by the Internal Security Forces in the afternoon.

Following coordination with the father, the aforementioned teen was arrested at his parents' home, the ISF added.

It said the body of “5-year-old Syrian child Mohammed Kh.” was found in the garbage dumpster with “multiple knife stab wounds to one of his flanks.”

During interrogation, the teenager “confessed to raping the child and killing him with a knife inside a cafe owned by the victim's parents, as well as to putting the corpse in a garbage dumpster in the area.”

“The report of north Lebanon's forensic doctor said the child suffered a sexual assault and died after receiving five stabs in his right flank,” the ISF said in its statement.

“The used knife has been confiscated and was referred along with the detainee to the Halba judicial department for further investigations,” it added.

right on jamesbond I totally agree

A 17 year old kid raped him ...what the hell is this world coming to?

My hat off for the father.

RIP poor child. This is as sick as it gets. Thats one more child that will never go to school, never get to fall in love, never get to be cool...

This is disgusting! Naharnet please respect the child's family and remove the picture.

The murderer should be jailed for life and not released like Geagea with delusions of running for president.

Please dont exploit even this tragedy to take a jab at some politician. Geagea fought in the civil war like so many else who has stuck to important official posts for years and years.

You sir are as disgusting as the picture, shame on you.

Stick to the story. Naharnet is simply reporting the facts to tell the story, and the entire Lebanon needs to know what happened.

That's exactly what everyone who supporters the filthy Geagea should remember. Yes this is unfortunate but it brings reality to geageas supporers.

Wtf are you talking about you idiot? What's this got to do with politics you shameless thing? Ascend from your tribal thinking just for a minute and think about that poor child and his parents instead of going on a political campaign. You're an idiot, seriously, you're an idiot.

I have had heated conversations with so many here, and I was never close to losing it, so well done, fair play, you idiot

Don't play stupid idiot. You support a child killer for president and complaining about me.

I'll put this in words you understand you idiot f... You and geagea, and anything else you stand for, idiot

You're an idiot, that's all I'm saying

Go get a life

Yep, I will try, I might even get one who knows, but you'll always be an idiot

And you sir is what comes out of it

lebpatriot
you are pathetic
what does this kid's story have to do with Geagea?? get a life dude and quit being so polarized

Another Geagea murderer supporter. You're pathetic.

Stick to the story. Naharnet is simply reporting the facts to tell the story, and the entire Lebanon needs to know what happened.

Moments like this show us how meaningless our arguments are, there are no words to describe such atrocity, I hope the judiciary sends a swift message. Terrible times.

Politik buro
Please relax no sense of getting upset Although I totally share your frustration please do like me and try to ignore. After such time I got used to this jab on this site to the point where I can only expect to read trashy comments+, so please keep your cool bro as these people cannot do better

I always do, but this guy is beyond repair, people are entitled to their opinions, and I like to think that I can converse with everyone here on both sides. This guy however needs to know how idiotic he is, evil prevails when good people stand aside

Some people just don't have what it takes to be a basic human being mate, you might as well be talking to a wall

I don't get it some people are so pathetic and so polarized to the point that all they see its this group's fault or vice versa. I bet they havde no clue what they are saying they simply get an orgasm on blaming someone or another
get a life idiots

I agree with you lebpatriot, Nasrallah is a pathetic child murder...... and all other murderers/Iranian takfiris should rot in hell.

Good Lord!!! Hang him by the balls, let him die a slow death. What an animal, but first let him be given the same treatment this dirty murderer meted on this poor innocent child. Just one example Ya Dawleh, one example, in public and let the rest learn.

Glad to see your posts again, welcome back