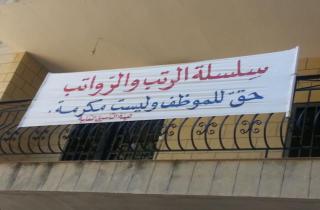 But the minister hit back later in the day, announcing that "there is a very high probability that the official exams will be held on Thursday."

He stressed that "no one intends to strip them (the exams) of the official nature in order to privatize them."

"It is only for the education ministry to decide whether or not to hold the official exams," Bou Saab underlined.

Earlier, the SCC said during a press conference: “If parliament does not approve the new wage scale draft-law on Tuesday, then the official exams will not be held on Thursday.”

Parliament is scheduled to convene on Tuesday to address the draft-law amid concerns that lack of quorum will prevent the session from being held.

The SCC added: “There are standards that should be adopted in holding official exams.”

“We hope that the Education Minister will hold the exams in cooperation with the SCC,” it continued.

“The Committee is united now more than ever and it will continue with its actions to achieve its demands,” it stressed.

“We are the keenest people to hold the official exams,” it stated.

“They are seeking to remove the official label of the exams and have a private company oversee them,” revealed SCC head Hanna Gharib.

The SCC is a coalition of private and public school teachers and public sector employees.

“If the parliament fails to endorse the pay hike draft-law we will plunge into a crisis, which is linked to the whole society,” warned Bou Saab, who is loyal to the Free Patriotic Movement.

“Our priority is to stage the official exams,” he said.

On Wednesday, the SCC declared a general strike at all ministries and public institutions on June 9 and 10, holding “the MPs who obstructed legislation for several months” responsible for a possible postponement of official school exams.

The differences on the pay raise have led to wide range protests and strikes by public sector employees and teachers who are holding onto a 121 percent increase in their salaries.

But the ministerial-parliamentary committee has proposed to reduce the total funding from LL2.8 trillion ($1.9 billion) to LL1.8 trillion ($1.2 billion).

And the article that matter the most has no comments, how typical. I hope this gets solved quickly, teachers should get what they deserve, education is the only good thing left in this country, no Thx to any M, probably because they don't get involved in things that actually matter.