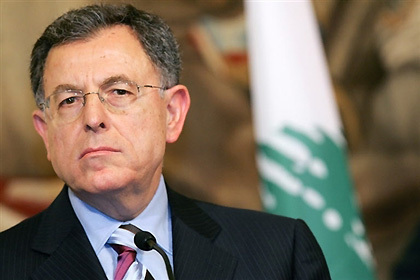 Al-Mustaqbal bloc on Monday announced that it will not take part in “pushing the country towards bankruptcy,” hinting hence that its MPs will boycott a parliamentary session dedicated for voting on the new wage scale draft law scheduled for Tuesday.

Bloc head MP Fouad Saniora explained after an extraordinary meeting at the Center House that the new wage scale draft in its current format has “disastrous” consequences on the state's finances.

“If adopted in its current format, the draft will increase the imbalance of public finances, it will influence the purchasing power and might drive the country into inflation,” a released statement read by Saniora said.

It added: “The proposed draft does not tackle serious revenues or provide the needed amounts to fund the new wage scale... It does not deal with reforms, control squandering and corruption, and it includes expenditures and wage hikes without any noteworthy improvement in the types of services citizens receive.”

"The deficit is a financial index and Lebanon has striven for years to get out of this impasse. More than ever, Lebanon needs to get out of its recession and this is the only safety boat for its economy,” the MPs considered.

And the Budget does not include the new wage scale's costs, which are still unknown and may raise the deficit, they noted.

Accordingly, the conferees declared that adopting the new wage scale draft is a “hasty step that will have disastrous consequences on citizens' livelihoods.”

“The bloc will not agree on driving Lebanon towards bankruptcy and turning it into a failed state,” said Saniora.

The MPs also lamented “turning students and families into hostages and using exams as a tool to achieve demands.”

“There are attempts to drive the country towards deterioration for hidden political goals,” they said.

“The bloc considers that the maneuvering of the March 8 alliance, not announcing its candidate, and obstructing the (electoral) sessions are harmful matters that contribute to obstructing this important constitutional juncture and pave the way for foreign interference that subjects it to dangers,” Saniora said.

It also urged “all parties to think of serious steps" to overcome the presidential vacuum.

Speaking like a true communist. Defacto sorry to say but you are wrong unfortunately all the politicians are corrupt. Some of them steal & bring prosperity build the country, others steal & with their act they destroy the countru

I prefer the first one.

This preaching comes out of the mouth of the head of the Mafia that fleeced the coffers!

lol @defacto ....shaklak fahmein da7esh baba....VAT tax ya ahbal was to generate revenue for the country since private citizen do not pay income tax....so few sources of income besides customs on cars and gasoline and tobbaco etc...it had to be in place since especiallay that you and your kind do not pay electric bills and living on the expense of the gvt!! idiot fini!! vraiment tu piges comme un pigeon....

The wage scale should be adopted. But it needs serious study. It needs to be lowered. And we need reform in the public sector.

To Defacto, Saniora, Hariri ashraf minak w min abook literally. Thefts by the general are not a joke or a myth, as we speak. So many from your kind talk with no proof. Many of your kind dont add anything to government electricity, helping peole, teaching them, etc etc ... all while you are stealing the republic 2ith your Hizbola and his wars.

"a “hasty step that will have disastrous consequences on citizens' livelihoods.”"

hey crook politicians: you had 3 years to study it! but kept procrastinating because you all refuse to give up your privileges! you refuse to reform because it goes against your businesses! there is money, just no will to satisfy legitimate demands of fed up citizens!
now you are just trying to scare people to smear the movement!

you are all useless and incompetent fools... pity those sheep still supporting you , they are as useless as you!

Ironic that a man like Saniora is complaining of something destroying the state's finances when him and his Mustaqbal jihadist brethren stole millions from the treasury.

Any proof, your idwots took thw government and wwrw never able to show any peoof oe they did submit any thing to court system.we know your kind how they wanted thw petrol sector so badly.

Any proof? Your idiots took the government were never able to show any proof or they did not submit anything to court system. We know your kind and how they wanted to cash on the petrol sector so badly, we know how ugly you are no matter how much you try to hide.

No proof so shut up.

Really no proof ... Who charged taxes at the airport, or on mazoot... All the Bribes.
No proof ... Can't you say they allllllllllllll stole something from US!!!!!!

Strait in your face. Give us facts. You dont have any substance. Idiot w jahil.

Return the billions of $$$$ you and your boss stole!

a large portion of the government revenues used to go and might still go to Syria. starting from the first government formed after the civil war (hrawi and hariri)..so the leb government might want to ask Assad for its money.

plus lebanon has oh so lovely trade agreements with syria...go view them and read about them so you get the picture..you dont have to have an education to read between the lines of these so called agreements

lol VAT is tax added onto items that consumers must purchase. If people 'went into poverty' because of VAT then it's their own fault for buying too many things when they were already on the brink of poverty. Learn some basic economics before you begin to spew please.

Defacto : VAT is the only way for millions of Lebanese working in the "black" and not declaring revenues or paying income tax to give back to the state.

When people officially earn $500 per month and make $1,000 in the black market, that's stealing from the state. So you tax them on consumption rather than income.

You're an idiot to believe we should not charge VAT.

Defactor : "I wonder why the country is bankrupt"

The country is Bankrupt because ever since Hezbollah murdered Hariri, our economy has gone down the drain. Hezbollah has done everything to :

- Kill our tourism industry
- Push our Youth to flee the country and work abroad
- Prevent foreign investors from putting money in Lebanon
- Push regional headquarters to move from Lebanon to other Arab countries
- Block privatisation of our infrastructure and end up with lousy telecom and electricity which only the private sector can revive.

If you believe VAT is the reason our economy is bad, then you know nothing about the economy and should simply shut up.

And if you want to talk about "theft", go have a look at Bashar's bank accounts including all his lebanese collaborators. The money is there !

Big john ... A thumbs up on that one.
I usually lean towards m14
But NOT this issue.
Your right 100% BigJohn