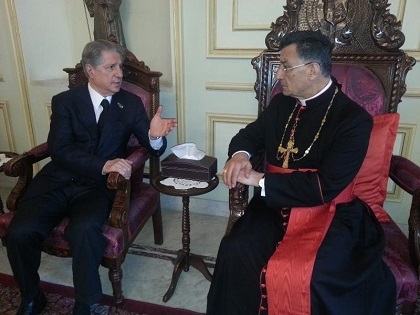 Phalange leader Amin Gemayel called on Tuesday for the immediate election of a new president amid an “unethical” boycott by several blocs, reiterating that parliament should not legislate in case of a vacuum at Baabda Palace.

“Parliament should only focus on electing a new president. It should not legislate in case of vacuum as the Constitution states,” Gemayel said following talks with Maronite Patriarch Beshara al-Rahi in Bkirki.

“The election of a president should be a priority. All efforts should focus on pressuring MPs who are boycotting the sessions,” he told reporters.

The majority of March 8 lawmakers have caused lack of quorum in several rounds of parliamentary sessions aimed at electing a new president.

The boycott of the MPs, which Gemayel described as an “unethical (move) against the Constitution, parliament and the nation,” comes amid differences between the March 8 and 14 alliances on a compromise candidate.

While March 14 backs the candidacy of Lebanese Forces chief Samir Geagea, the Hizbullah-led March 8 camp says there is a need for a consensual president.

Their differences led to a vacuum in the country's top Christian post when President Michel Suleiman's six-year term expired on May 25.

“Legislation should only take its normal course after the election of a president,” Gemayel said a few hours after parliament failed once again to discuss a controversial draft-law on a wage hike for the public sector.

“We support social rights but there are priorities,” the former president stressed.

“Political, constitutional and parliamentary life would be organized only after the election of a head of state,” he said.

Kataeb MPs were among other March 14 alliance lawmakers who on Tuesday boycotted the legislative session on the wage hike.

The boycott is aimed at sending a message of protest to the March 8 alliance that has paralyzed the electoral sessions.

No point in trying to shame a grumpy old man. We all are aware if how the minds of our senior citizens work once they reach a certain maturity they have a propensity to decline in logic and revert to a senile and delusional state where no amount of reasoning can convince them that they are no longer 21 with flowing brown locks and cannot climb that apple tree, although you know they will try and in doing so they are admitted to observation at their local hospital for over exertion.

I'm beginning to think there's no solution in Lebanon other than a military coup and a total ban of religion. Otherwise federalism.

Time to change things in Lebanon .

You can say a lot of things about Jamil Al Sayyed but this guy is a great manager and a rational thinker. He did a great job when he was in charge of General Security Directorate and today, once again, he was visionary today when he called for a FEDERAL STATE IN LEBANON:
http://www.lebanonfiles.com/news/725855

I would say that the Taef Accord's allocation of half of Parliament to the Christians has plagued all the religious groups in Lebanon, contaminated them, but especially those that directly profit from the reverse-power-sharing or go along for the paycheck.

Aoun: stupidity, selfishness, arrogance,hateful, jealous,moron, idiot, will lick anyone's ass for the chair in Babeda and if you don't believe me ask Harriri. Finally I expect him to have the stupidest son in law