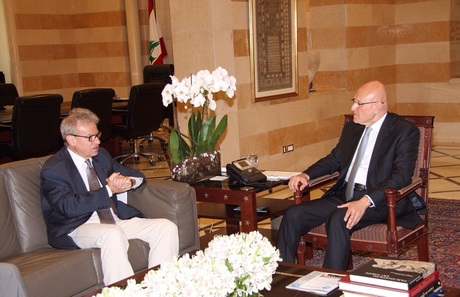 French Ambassador to Lebanon Patrice Paoli announced Tuesday that his country's stance is based on supporting the Lebanese Constitution and the Taef Accord, after Hizbullah chief Sayyed Hassan Nasrallah accused Paris of being the first party to raise the issue of “tripartite power-sharing” during a meeting with Iranian officials.

Following talks with Prime Minister Tammam Salam at the Grand Serail, Paoli said he expressed France's support for the Lebanese state institutions and for the government, which has assumed presidential powers since Michel Suleiman's mandate as president expired on May 25.

“There are questions regarding the French stance which are not based on any facts. I have once again highlighted the well-known and clear French stance, which is based on supporting the Constitution, including all its known elements – the Lebanese National Pact, the Taef Accord and the current Constitution,” Paoli added.

Nasrallah had said Friday that “years ago, the French were the first party to raise this issue (of tripartite power-sharing) in Tehran.”

“They told the Iranians that the Taef Accord had become outdated and asked them about their opinion regarding tripartite power-sharing. The Iranians had never thought of this matter, but they asked us about it and we said that it is totally out of the question,” Nasrallah added.

And on Monday, the Kataeb Party called on France to clarify its stance on tripartite power-sharing in light of Nasrallah's remarks.

Paoli also said that his country believes that Lebanese state institutions must continue functioning “according to the Constitution” amid the current presidential void, calling for the election of a new president.

“This stance is clear. As Lebanon's friends, we today call on the Lebanese to elect a president away from any interference, as the selection of a president is a Lebanese affair before anything else,” the French ambassador added.

“As Lebanon's friends, we also hope the Lebanese would support the institutions, the government and the parliament,” he went on to say.

In other words, confirming what we all know.... Nasrallah is a liar

does he ever say the truth ? But then is audience is very receptive...
Lying is haram, but taqiya is ok...