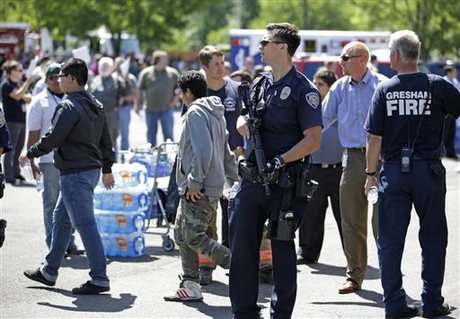 U.S. police named the gunman in America's latest deadly school shooting Wednesday as 15-year-old Jared Michael Padgett, saying he had multiple weapons and could have killed many more people.

Padgett, who carried his guns in a guitar-case and duffel bag and wore a camouflage helmet, killed himself after shooting one student dead at Reynolds High School in Oregon, they said.

He obtained his weapons -- a military-style AR-15 type rifle, a semi-automatic pistol, a large knife and hundreds of rounds of ammunition -- from a locker at his family home.

"The weapons had been secured, but he defeated the security measures," said Scott Anderson, police chief of Troutdale, outside Portland where Tuesday's attack took place.

After arriving on a school bus, Padgett entered a boys' locker room, where he murdered 14-year-old Emilio Hoffman. A teacher, Todd Rispler, suffered a grazing bullet wound to the hip as fled.

Despite his injury Rispler made his way to the school office to sound the lockdown alarm, as Padgett -- dressed in jacket designed to carry ammunition and a camouflage sports helmet -- emerged from the locker room.

"As the shooter was moving through the main hallway he encountered officers who were starting to enter from two separate hallways. At that time he moved into a small restroom," Anderson said.

"There was an exchange of gunfire between one of the first responding officers and the shooter," he said, adding that, based on an autopsy, "the shooter died of a self-inflicted gunshot wound."

The Oregon shooting was the fourth in three weeks in the western the United States, following incidents in Santa Barbara, California, Seattle, and Las Vegas last weekend.

On Tuesday, President Barack Obama called for national "soul searching," saying mass shootings were "off the charts" in a way no other advanced country would tolerate.

As the drama unfolded, live TV pictures showed the increasingly common sight of students filing out of the school with their hands on their heads.

"My daughter was just shaking and scared," said one mother. "She was huddled in the corner of a room with some students and had the lights out," she told KOIN 6 television.

"When a SWAT team person unlocked the door to her room she freaked out, thinking that it was the shooter coming in," the mother, identified as Becky, told the broadcaster.

Anderson added that, during the school search, another gun was found, and its owner taken into custody. He stressed that this appeared totally separate from Tuesday's shooting.

This was the fourth shooting in three weeks in the former Wild West region of the United States.

On May 23, a student with mental problems, the son of a Hollywood director, went on a gun rampage at a college campus in Santa Barbara, north of Los Angeles, killing six people and then himself.

On June 5, a gunman killed one person and injured two others on on a college campus in the northwestern U.S. city of Seattle, in what the local mayor denounced as America's "epidemic of gun violence."

Then on Sunday, a couple with possible links to anti-government militia shot dead two police officers execution-style in a Las Vegas pizza restaurant, before killing another civilian nearby and then themselves.

But the latest wave had triggered only muted public debate, possibly due to the scale and regularity of the killings or the the lack of concrete progress generated by previous protests.

President Barack Obama changed that Tuesday, launching a heart-felt lament that such attacks were "becoming the norm" -- and dismissing the argument shootings were primarily a mental health issue.

"The United States does not have a monopoly on crazy people," the president said during a Tumblr online forum.

"It's not the only country that has psychosis, and yet we kill each other in these mass shootings at rates that are exponentially higher than any place else.

"What's the difference? The difference is that these guys can stack up a bunch of ammunition in their houses."

The school where Tuesday's shooting occurred has some 2,800 students, although many of them finished classes last week, so it was unclear how many were on site.

National and local TV news channels covered the scene live, showing large numbers of armed police scrambling to lock down the school after reports of shots fired around 8:00 am.

But about an hour later, the Multnomah County Sheriff's Office said the situation was "stabilized."

Naharnet, *sigh*: third paragraph - "has still NOT been identified".
You know, there are handfuls of perfectly erudite Anglophone graduates looking for jobs in Lebanon. Consider hiring one of them to proofread the articles.

I read this type of story every week now. Yet the NRA and all those who advocate the preponderance of guns outside the hands of law-enforcement agents in our society still have the insolence to look themselves in the mirror. Oh that's just classy! Nothing classier than the single-digit-I.Q. interpretation of the Second Amendment to deprive others of the lives that they would have needed to benefit from the First Amendment.
When I die, I don't even believe anymore that it will be through a gun-nut; it will probably be from suffocating on my own puke the day that cases like these will no longer be the isolated tragedies that they presently are contained as, but the NRA-facilitated norm.