Qabbani Expands HIC's Electorate: Grand Serail Does Not Scare Us 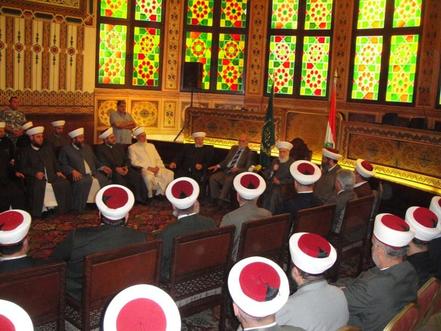 Grand Mufti Sheikh Mohammed Rashid Qabbani and a number of scholars and imams on Wednesday re-expanded the electorate responsible for the election of the Higher Islamic Council's head, as the mufti lashed out at “the Grand Serail and those who are in the Grand Serail.”

The development prompted a meeting at the Grand Serail under Prime Minister Tammam Salam to “discuss the steps taken by the so-called Higher Islamic Council.”

“We will expand the electorate and put things back on the right track. This is your right and this is something that I entrust you with,” Qabbani told the scholars as the HIC meeting got underway.

“Do not allow anyone to usurp Dar al-Fatwa's decision … I appreciated him (ex-PM Fouad Saniora) in the past and I cooperated with them loyally and faithfully, but they do not have loyalty and they do not have honesty … They want to subjugate all people and they don't care about religion,” Qabbani added.

The HIC -- which elects the Mufti and organizes Dar al-Fatwa's affairs -- has been at the center of controversy since 21 of its members, who are close to al-Mustaqbal movement, extended its term until 2015 despite Qabbani's objection. They said the extension is aimed at “continuing investigations into financial violations and modernization efforts.”

The Mufti later held elections for the Council, which were deemed illegal by ex-PMs Saniora and Najib Miqati and the group led by Qabbani's deputy Omar Misqawi, who argued that the polls violated Shura Council decisions and did not enjoy a legal quorum.

On November 2, 2013, the Misqawi-led council extended its own term to June 2015, calling on the mufti to resign.

“Today they will meet at the premiership's headquarters, is that a threat against us? Should we be scared if the members of the former higher council meet at the Grand Serail?” the mufti asked.

But the conferees at the Grand Serail were quick to hit back, saying “these suspicious steps -- which were made by someone who does not enjoy any legal status or jurisdiction in line with the Shura Council's judicial rulings – contradict with Dar al-Fatwa's historic and national heritage.”

They said the move to expand the HIC's electorate “reflects insistence on mutineering against the principle of the state and its institutions and on the violation of the law.”

“This is a dangerous and irresponsible move that persistently aims to undermine the unity of the Sunni sect and engage in an unprecedented political plot to fragment it through sowing discord among its religious and civilian components,” the conferees warned.

They also revealed that they have started “taking measures aimed at steering Dar al-Fatwa clear of personal whims and political interests that do not serve the higher Islamic interest.”

hahaha spoken like a sheep jerry! Have a nice day :)

any steps taken by this robber will have no effect. elections are decided at the level of PMs and sunni dignitaries.