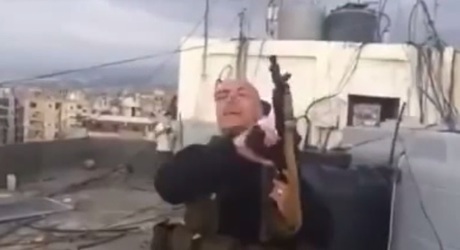 The whereabouts of the suspect who appeared in a controversial video message vowing to “liberate the Baabda Palace from the upcoming president” remain unknown.

According to al-Joumhouria newspaper published on Thursday, Justice Minister Ashraf Rifi referred a three-minute video, which went viral on social media, to General Prosecutor Samir Hammoud in order to apprehend three men and put them on trial.

The video shows three men celebrating the Resistance and Liberation Day on May 25 by opening fire from machine guns from the rooftop of a building, reportedly located in Dahiyeh.

Hammoud tasked the Central Intelligence with identifying the suspects, in particular the man who said statements that “harm the national security and threatens coexistence.”

However, the daily said that the main suspect fled, prompting Hammoud to issue a search and investigation warrant against him.

Information obtained by the daily said that the man fled to the South.

The main suspect said in the video that this “was all in hopes of liberating Baabda from the new president,” he continued eagerly: “On Tariq al-Jadeedah.”

“Bullets will fall like rain today on Tariq al-Jadeedah... Poor them, they're very civilized,” he added.

“Do you have any bomb?” the shooter wondered sarcastically, he then said: “This shot is for the eyes of Bashar Assad... and (Speaker Nabih) Berri.”

The three men fired non-stop until they were out of ammunition.

hizbushaitan hiding their terrorists as usual.

The terror party and its members continue to undermine the state and the law. This identified terrorist will soon become a Saint where iraqi shia will come to pay respects to his sainthood.

this man is and his belong to is pysco and his party who belong to, he should go back to iran and try to do that and you will see what will happen to him

He was probably promoted to deputy thief-in-chief chez Nabih and Randa.

Or my sources say he was promoted to counter-band supervisor at the airport or port.
His CV says that he was an electricity-theft technician and before that he worked in the fictitious agriculture subsidy department of Amal.
He performed well and so was given the task of leading a team in the roof-shooting joint venture between Amal and Hezbollah.

He has 25 kids and 3 wives and they all work in government doing very important loitering and collecting bribes left right and center. They all have villas in Tibnin.
They all acquired executive masters in roof shooting from the Amal & Hezbollah Foundation for theft, assassinations and propaganda.

lol!!!!!! he is probably commanding his wives who are appointed by amal as gov employees or as non teaching teachers or overstaffing the parliament, to march towards downtown and demonstrate for pay raises undermining the government from inside and from outside!!!!

where are Flamethrower and his stooges???

Like how Harb's assassin hid only to die a "hero" in Syria. What a joke.

Where is Southern, FT, Mowaten, Mystic and TheResistance 10.3 (he keeps changing version because he fails all the time) ? Don't you want to defend your terrorist criminals ?

It's time to "liberate Lebanon" from Hezbollah occupation. If Hassan Nasrallah fails to deliver all suspects involved in gunfights, murders and assassinations, may the doors of hell open up on Dahyé ! There is no place for Hezbollah dogs in Lebanon !

There's actually a 4th man "shooting" ... the video. He has to be apprehended too !

They were liberating palestion from tariq el jadeedah. Hang them by their balls. The word thugs come to mind.

Bring in the army and interrogate his family his associates his uncles and aunties and make life unbearable until they turn him in. Then charge them for aiding a fugitive and if HA is found to be doing this drag Hassan out and charge him also. Our army need their mandate to do their work and we as the people have given them this freedom that no amount of political cover can supersed. God bless our LAF

@FT : your terrorists aren't just shooting. They are showing their sectarian hatred of Sunnis and Christians ... Hezbollah cancer must be eliminated once and for all !

a video very very symptomatic of the way hezbi and amal sheep think and supported by aounies....

As Hassan Nasrallah said, no single action of Hezbollah member happens without the full knowledge of the Kezb ! The Kezb and Hassan is to be held accountable for this !

FT, are you saying HA does not turn a blind eye to the shooting before speeches? are you saying they cant stop shooters in dahye but can fight israel and nusra at the same time?
I am christian, i live in sodeco and i had to repair my window twice because of bullets. Acceptable for you and Aoun?

hey worm, now you need a certified party membership card to support a party? otherwise you are not a supporter! what a stupid and empty argument as usual...LOL

cut your BS you are rather very embarassed that your allies show their true colors that you are trying to find any excuses to say he is not a hezbi supporter! LOL

you are just a sissy refusing to assume his idiocy!

Not the first time flame but definatley should be the last. Which civilised self respecting country allows for such dangerous and sickening behaviour? And I don't refer to just the Shiites. We have become ammuned to this behaviour for too long have turned a blind eye. Do not try to defend or down play these things for to do this is to give up on your own principals.

probably hiding in the sewers of Iran. How can any political party tolerate such stupidity. Such hatred by all sides will keep Lebanon in the dark ages....

Typical anarchic attitude that all followers of this party have. Their ignorance is what controls them, you can´t expect so much from people that haven´t been to school, and all the information and education they receive is force fed to them by these religious (terrorist) leaders who make up these conspiracy theories in order to keep them brainwashed into believing that they are being followed, that the rest of the population and world wants to get them. They all need psychiatric help, it sounds stupid, but seriously that´s all they need. It is like a family business, and the patriarch (hassan) is the one with the last word when the rest of the family do or decide something he doesn´t like. Oh you had to do May 8? why, because you are the king of the world? dude with delusions of grandeur, but everything comes to an end, either people wake up, or a bigger dictator will come and overthrow him.

Seriously, why do we have to care about Assad before our own country? please, explain to me. Take any other 3rd world country in the civilized world, even if it´s a weak country, does it meddle in its neighbors affairs? wake up people, this is insanity. We are Lebanese before anything else, so if you see your country drowning because of another country´s internal issues, what´s the benefit of it? unless that country is financing the party of God and that´s the only reason it needs it to impose itself against the Lebanese people´s will. Wake up people, you followers of that party, wake up, educate yourself, learn to talk, behave, prosper.

like Nadim Koteich said, Dahieh is HizbIran's barracks in front of Baabda. Every time president need to take a decision, he looks through the window and see the iranian agents really to storm...