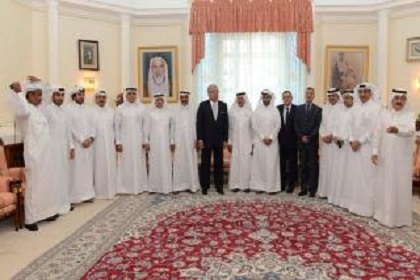 Interior Minister Nouhad al-Mashnouq stressed on Thursday at the end of a short visit to the Gulf country Qatar that “Lebanon will witness an economic boom within ten years due to the promising oil reserves.”

“The Arab investments in Lebanon haven't been lost during the last four decades, on the contrary they increased, despite all the turmoil that Lebanon passed through,” Mashnouq said during a meeting with President of the Qatari Chamber of Commerce and Industry, Sheikh Khalifa bin Jassim al-Thani and Qatari businessmen.

The minister reiterated that the security situation in Lebanon is “under control and will remain as it is for a long time.”

Mashnouq urged Qatari businessmen to return to Lebanon, calling on the state to lift the travel ban to the country.

He pledged to offer Qataris all the “needed help to provide them with the comfort they need and facilitate the offered services.”

Several Gulf states, including Saudi Arabia, Kuwait, Qatar, the United Arab Emirates and Bahrain have repeatedly issued travel advisories, warning their citizens against visiting Lebanon due to the security chaos.

However, Riyadh recently lifted the travel ban to Beirut.

Unless Hezbollah disarms, we will not experience any other kind of BOOM than a BAD BOOM.

No possible economic growth as long as militias and armed terrorists exist in this country.

Disarmament is the only path to economic revival of Lebanon and prosperity ! No sain investor will put a penny in this country otherwise ! Not for oil, not for job creation, nothing !

i'm sure u're not that stupid to believe what u post...

@Cedre : unfortunately he is. Hezbollah forced ISIL to flee Lebanon and Syria and sent them back to Iraq ! They are strong enough to take over Irak like wildfire but incapable to do so in Syria where they were "massacred by HA and Assad".

Thank you for my daily dose of humour FT.

Now get down from Hassan Nasrallah's lap... Lebanon is safe from any upcoming invasion of Cannibal Zombie Takfiri Da3esh Nusra Isil BS ! Thanks to Hassan of course !

This is pure ignorance of economics. Oil reserves is a curse today well known as the "dutch disease". One more excuse for the government incompetence and inaction...

u can avoid dutch disease by investing in funds, gold, infrastruture and education, like Norway...

If things continue to be run by Mafia Mustaqbal Ta3ees & Co., the economic boom will definitely hit their pockets by fleecing the remaining decent and hard-working Lebanese, the few remaining to rot in Lebanon.

coz u need 3 years to do offshore drilling...
Didnt Israel need more than 10 years ?

Travel advisory, not a Ban!

@ Flamethrower, ISIL is purely Saudi trained and armed to do problems in Iraq because Maliki is chiite and following Iran. As for them not beeing here because Hezbollah is here, you are repeating the same words FPM said with their MOU, hezbollah is here to protect us. We do not need protection from anyone, i must remind you that during civil war, the christians confronted both palestinians lebanese leftists and syrians. the ISIL is no threat to us than then an termite. Plus, if we all lebanese agree to confront this threat as one lebanese army united all religions together, imagine wht we could accomplish. We will be ten times stronger. So stop it justifying hezbollah's weapons.

@ Flamethrower, Hezbollah has done good and bad things, now we must ask them to either join the army as a special regiment for the south, that will be tasked to protect south Lebanon from Israelis threats, there will be another multiconfessionnal regiment in the north protecting the border, not more than 30,000 men. 10,000 would join the ISF, 10,000 would constitute commando regiments only. Thats all we need. If we organise internally, get new weapons under the sole state authority, you will see that no one will dare touch us

Mr. Mashnooq Keynes said that in the long term we are all dead. Who knows what would happen in 10 years. Lebanon needs investments today. CNN reported that Savills World Research, Candy & Candy and Deutsche Asset & Wealth Management said that Beirut is one of the top cities in this world to invest in real estate, http://money.cnn.com/gallery/luxury/2014/06/01/rich-real-estate-cities/

As a minister in the current government, you should promote Lebanon today not in 10 years!

I apologies, the title of the article was confusing. Mashnooq actually is promoting investment in Lebanon today. Good job. Well done.