Obama Says U.S. 'Looking at All the Options' in Iraq 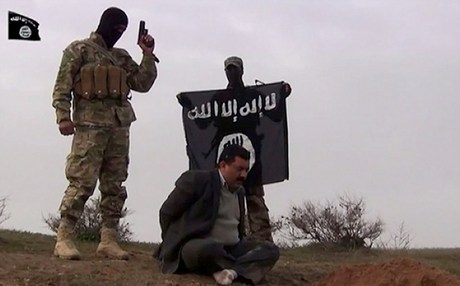 U.S. President Barack Obama said Thursday that his national security team was "looking at all the options" as the crisis in Iraq unfolds, with Arab jihadists pushing towards Baghdad.

"Our national security team is looking at all the options... I don't rule out anything."

But he also said the jihadist offensive should be a "wake-up call for the Iraqi government."

On Wednesday, the United States pledged to boost aid to Iraq, and one U.S. official told Agence France Presse that Washington was weighing several possibilities for more military assistance, including drone strikes.

In a lightning offensive, jihadists from the Islamic State of Iraq and the Levant (ISIL) have swept up a huge swathe of predominantly Sunni Arab territory in northern and north-central Iraq, including the second city Mosul.

Obama noted that Washington had a "stake in making sure that these jihadists are not getting a permanent foothold in Iraq, or Syria for that matter."

"Frankly, over the last several years, we have not seen the kind of trust and cooperation develop between moderate Sunni and Shia leaders inside of Iraq," he said.

Can you tell us who is fighting ISIL in Syria wih hardly any support? Let me give you a clue: not the regime! And not the sectarian militias suppored by Iran!

Thank You George W. Bush and Barack Obama for your "Achievements" to mankind and your Wars of "democracy & freedom"

• Cost 4,500 American lives
• Cost 2,000,000 Iraqi lives
• Found no weapons of mass destruction
• Destabilized the Middle East
• Put the country in a position to be overrun by Wahhabi extremists

UNDER OBAMA:
Our funding of the Syrian "freedom fighters" aka the good Al Qaeda:

► Took control of Mosul Iraq in a lightening attack on Monday.

► Has become the richest terror group in history after looting $429 million in cash and gold bullion from Mosul's central bank.

► Took over the city of Tikrit and is assaulting Samarra. ISIS also captured Fallujah and Ramadi in January.

► Routed Iraqi security forces - which the US and Britain spent billions training and equipping.

► Forced at least 500,000 men, women, and children to flee several cities in what one expert calls "the largest and swiftest mass movements of people in the world in recent memory".

Hyocrite! ISIL is doing this. The same ISIL that (the less evil twin) Al Qaeda and the other rebels are fighting.

Here I would fault you. The US and UK disbanded the Iraqi armed forces and Iraqi security. They were holding the country together and they were a professional army.
Bremer disbanded the Iraqi army with the aim of dismembering Iraq, later Syria and potentially Lebanon.
That was all done for Israel's security. Although the best thing that could happen to Israel's security is a just peace with the Palestinians.

Lest we forget that both the Gulf monarchs and the Ayatollahs played parts in the 2003 invasion of Iraq.

On this I agree with you 100% theresistance4.0. But I would add that if Saddam had resigned after the fiasco of the first Gulf war, none of this would have happened. After all the Iraqis are more important than any one person.
But that does not excuse George W. Bush or Tony Blair. They are war criminals.

What the US needs to do, is to put their hands with HA, and drive these takfiris/SA away...

The US provides the rebels with enough weapons to survive but not to get the upper hand. It is difficult to believe that few thousand ISIL members routed tens of thousands of Iraqi troops! Something more is going on!

haven't you noticed that in syria came ISIL: hezbollah arrived at the rescue...
in iraq comes ISIL and iran comes to the rescue... as if, like we keep saying, ISIL is manipulated to justify the presence of the islamist revolution of iran in both countries! LOL....

and ISIL in syria avoids attacking regime held areas... only other islamists! and M8ers say they are not manipulated? LOL

raqis are a great people. Iraqis are great doctors, engineers, scientists. They were secular. They did not distinguish between Iraqi Kurd, Sunni, Shia, Jew or Christian.
Then Israel came along and the cold war kicked in. The king was torn apart and the dictators rolled in. And then came the foreign invasions that completely obliterated the country. And now after all these years, nothing is left. The educated class has left a long time ago and is thriving in the US, the Gulf and the UK while Iraq is stuck between Maliki and ISIL.
God help this great nation.

The US invaded Iraq and dismembered its army and turned it over to a bunch of incompetent sectarians.
The only hope was Ayyad Allawi but the US never backed him, choosing the sectarian kleptomaniac Maliki instead.

Of course I agree. I remember also that Khomeini came on an Air France plane from France and that Osama Bin Laden was backed by the CIA against the soviets.
The US anti-soviet policy to repel communism from Iran and the Gulf created 2 Frankenstein like extremist movements.

Arab nationalism and secularism were the target and Saddam's invasion of Kuwait was their death knell.

Texy honestly ur not even worth debating your all over the map with ur "Bashar, HA, Iran, ISIS" conspiracy theories that ur tripping over ur own dick! At least Machia is making interesting comments which btw I agree with on many points....Anyways boyz World Cup time im out Green N Yellow taking it all za way baby! GOOOO HA...I mean BRAZIL! lol Have a nice day

PS Texy #StillWinning ISIS are ur holy rebels not ours B)

The way I see things is that extremism has paved the way to hell in the Arab world. Baathism, religion and the Palestinian cause were exploited to further the interests of dictators and their families. Today everyone, including the Iranian regime, has learned that extremism begets blood and misery and the only salvation is freedom, democracy, forgiveness and education.

Everyone of us is a human being. And we all have the same basic aims: to live at peace in a secure community, to be able to make a decent living, to be healthy, to have a family, to be able to buy a house, to see justice served, to be respected by the state and people around us, to have our dignity all the time and to be able to hope and strive for a better standard of living.
It does not matter from what race, sect or sex you are are. We all live in a beautiful part of the world, be it Iraq, Iran, Syria, Palestine or Lebanon. We are all neighbours and we are all extremely emotional.
Why can't we just live and let live. Build communities that our children would be proud of. Enough anger, death, blood, threats, sectarian language. Enough!

McClatchy Washington Bureau
"The government of Iraq, where American soldiers fought and died for the better part of a decade, is in full retreat before an onslaught from a radical Islamist group dedicated to establishing an Islamic state in Iraq, Syria and Lebanon. But the magnitude of the crisis has yet to capture the attention of Washington.
As fighters from the Islamic State of Iraq and Syria on Wednesday tightened their grip on Iraq’s second largest city, captured the hometown of Saddam Hussein and pushed to less than 100 miles from the Iraqi capital, the Senate Foreign Relations Committee met to question the man President Barack Obama has nominated to be the next ambassador to Iraq. Yet not a single senator asked him directly about the Iraqi government’s apparent loss of control.

Saudi Arabia is the sponsor of terrorists from ISIS / If you want to understand the significance of ISIS's most recent territorial gains, just have a look at the map below, which shows those gains relative to Iraq and Syria's major oil fields. Now think who get the profit from the seizure of oil fields in Syria and Iraq? Will terrorists from ISIS sell oil yourself? No. No one will buy it. Who is the main seller of oil? Off course Saudi Arabia - the ally of US. This information explains today's article published by McClatchy (US): "What? Iraq? Members of Congress show no interest in country’s burgeoning crisis."

They also didn’t ask questions of the man who sat next to him, the current U.S. ambassador to Iraq.No one pressed for answers about how many U.S. weapons supplied to the Iraqi forces had ended up in insurgents’ hands as Iraqi forces shed their uniforms and fled their posts. Or what the fate will be of the U.S. military assistance program to Iraq, on which American taxpayers have already spent $14 billion. Or why they thought the American training program for Iraq’s military had resulted in such a humiliating rout.

Elsewhere on Capitol Hill, the House Armed Services Committee also showed a decided lack of interest in Iraq developments. At a daylong hearing, Secretary of Defense Chuck Hagel fielded not one question about Iraq. Admittedly, the hearing topic was the prisoner exchange that delivered five Taliban officials to Qatar from Guantanamo in return for captured Army Sgt. Bowe Bergdahl, but there was no limitation on what the committee members could ask.
A Senate staffer, asked about the omission, acknowledged surprise at the lack of curiosity from the Foreign Relations Committee about a country where nearly 4,500 Americans had died.
“I think that there is a general sense of apathy about Iraq,” the staffer explained, asking not to be identified because the comments might be seen as critical. “Iraq is mostly viewed in terms of other issues.”"

it will be difficult for you when you awake from the lalaland of yours...
good to have an empty brain you let others think for you...
good parasite you are, little worm