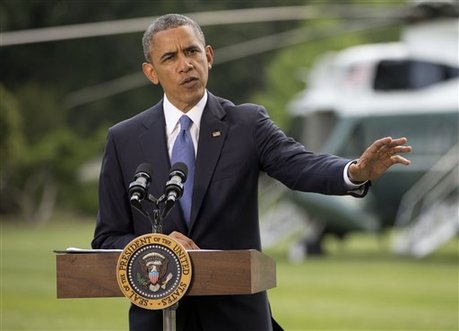 U.S. President Barack Obama said Friday that he is examining options short of sending ground troops to help Iraq counter a Sunni extremist offensive, but warned the country must heal its own divisions.

"We will not be sending U.S. troops back into combat in Iraq, but I have asked my national security team to prepare a range of other options that could help support Iraqi security forces," Obama said.

But, in brief remarks to reporters at the White House, Obama warned the Baghdad government that it had brought disaster on itself by failing to heal the divides between Sunni and Shiite camps in the country.

"The United States will not involve itself in military action in the absence of a political plan by the Iraqis that gives us some assurance that they're prepared to work together," he said.

"We won't allow ourselves to be dragged back into a situation in which while we're there we're keeping a lid on things and, after enormous sacrifices by us, as soon as we're not there, suddenly people end up acting in ways that are not conducive to the long-term stability of the country."

The United States withdrew the last of its occupation forces from Iraq in 2011, eight years after they overthrew the then dictator Saddam Hussein, but Obama sad he was studying options to increase ongoing support for the Iraqi military.

He added, however, that "any action that we may take to provide assistance to Iraqi security forces has to be joined by a serious and sincere effort by Iraq's leaders to set aside sectarian differences.

"Nobody has an interest in seeing terrorists gain a foothold inside of Iraq and nobody is going to benefit from seeing Iraq descend into chaos," he said.

"So the United States will do our part, but understand that ultimately it's up to the Iraqis as a sovereign nation to solve their problems."

Later on Friday, the United States said it has not begun talks with its traditional foe Iran on the renewed crisis in Iraq, despite Washington and Tehran's shared interest in supporting Baghdad.

"No, we are not talking to the Iranians about Iraq," State Department spokeswoman Marie Harf told reporters in response to a question at her daily briefing.

Even though the U.S. and Iran have not had diplomatic relations for three decades, the two countries held bilateral talks this week in Geneva as they seek to hammer out a deal with global powers on reining in Tehran's nuclear ambitions.

The U.S. was "focused on the nuclear issue," Harf said, adding she would not speculate on where ties would go in the future.

"What we said is that all of Iraq's neighbors -- including the Iranians -- need to not do things to destabilize the situation even further, to not try to promote any sectarian tensions."

Shiite Iran is a key ally of Maliki, whose government has been left in disarray by the collapse of its security forces since Monday in northern and north-central Iraq.

Rouhani told Maliki in a telephone call that Tehran would do its utmost to "combat the massacre and crimes of the terrorists," his office said.

Iran "will not allow the supporters of terrorists to destabilize Iraq," he said.

Harf agreed that both Washington and Tehran had a "shared interest" in what happens in Iraq, but said she had nothing further to say on the "internal calculations about who we're talking to right now about Iraq."

VERITAS the problem is EINSTEIN is that "we" went in at all the first place! "WE" created this mess! btw hats off to you M11er I LOL-ed when i read your comment u too Ultra ;)

I usually choose never to debate morons because they beat you with ignorance however in ur case dum dum ill reply...When on Gods green Earth have I ever mentioned 'Irak" (as you spell it) and "winning" LOL Yes Haboob HA and Bashar ar WINNING in SyriaIve stated that many many times and guess what numb nuts THEY ARE. So now YOUR head choppers turned east and took swaths of "Irak" from a very weak regime (which was established by YOUR friends the US). Sistani has finally called to confront UR monsters and Now Iran has also responded saying they will aid the "IraK' to fight off ur holy head choppers. So starting today (thanks to ur monsters invading Irak) We will be WINNING there too! :)

hey southern, if SAA "blew up nusra and isil" and bashar won by a landslide according to his lovers, then why aren't the refugees returning home as there is no more threat as you claim? LOL

The Middle East is living its Middle Ages and its own 100-year war...
When most Middle Easterners reject "Western" values, (in fact, those values are human values that the West inherited and embraced from past civilization such as the Babylonians), they end up with "Eastern" ones that are based on sectarian prejudice and religious extremism.
The end result of which is what we are seeing today in Iraq, Syria and Lebanon. And this is just the beginning.