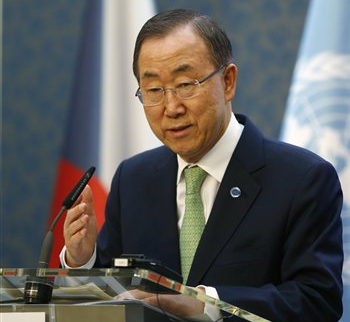 United Nations Secretary General Ban Ki-moon was seeking to launch efforts on the international scene to push Lebanese powers to stage the presidential elections, reported the daily An Nahar on Saturday.

It said that Ban was aiming to kick off an initiative to that end, but he postponed his efforts in light of the recent offensive of the jihadist Islamic State of Iraq and the Levant in Iraq.

Moreover, An Nahar reported that the ambassador of a major power informed a Lebanese minister that his country “has no answers regarding the elections due to the developments in Iraq and their precedence over other regional affairs.”

Official circles confirmed to the daily that “it has become more difficult for Lebanese powers to wait for regional and international negotiations over the elections given the crisis in Iraq.”

Waiting for these negotiations will only prolong the presidential vacuum and expose Lebanon's stability to various dangers, especially since some fears have been raised that ISIL's reach may not be far from the border, added An Nahar.