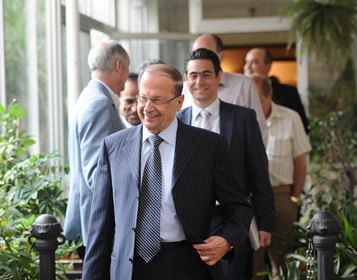 Head of the Free Patriotic Movement MP Michel Aoun may travel to the French capital Paris on Tuesday to meet chief of the Mustaqbal Movement MP Saad Hariri, reported al-Joumhouria newspaper on Saturday.

An informed political source told the daily that the two officials will tackle all pending issues, especially the presidential elections.

Other sources said that the “dialogue between the Mustaqbal Movement and FPM will resume openly soon.”

The resumption of the talks between the two sides will not necessarily mean that the Mustaqbal Movement will endorse Aoun's nomination for the presidency, added the sources.

Aoun is scheduled to appear in a television interview on OTV on Monday night.

The sources interpreted the lawmaker's rescheduling of the interview from Tuesday to Monday may mean that he is traveling to Paris to meet Hariri.

Aoun has announced that he would only run for president if he was presented as a consensual nominee, particularly eying the support of the Mustaqbal Movement.

God bless General Aoun for his staunch patriotism and protection of Lebanon from the evil schemes of Saudi Arabia and their local puppets.

but but stupid M8ers here have said that hariri was finished! a nobody! no more role to play! oh! then aoun needs a nobody?
wahahahaha! how stupid M8ers are....

He has a loan from Bank Saderat Iran.

This could be something or could be nothing. Aoun travels in circles, aimlessly, probably because his eyes rotate around in his eye sockets so that the thinks he's going some where.

most of the time in ksa and morocco, he's staying free in the royal families' properties. They're linked to lebanon by raid solh's daughters...