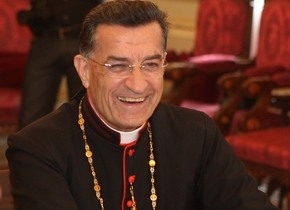 Patriarch Beshara al-Rahi voiced calls on all political factions and parties to launch a “courageous” initiative to face the recent dangerous developments in Iraq and Syria, and counter the repercussions that could affect Lebanon, reported the state-run National News Agency on Saturday.

“We reiterate calls on candidates running for the presidential post, the alliances of March 8 and March 14 and centrists to launch a brave initiative, towards the needs of Lebanon and to face the recent developments in Iraq and Syria and its repercussions on our country,” said the Patriarch.

"Although we were happy that they have come to participate in a national coalition government, it hurts that they are still divided over electing a new president.”

He said: “Agreement (among politicians), a reconciliation and peace all require bravery that far outweighs the courage required in conflicts and wars.”

The Patriarch concluded by stressing the necessity for politicians to gather for dialogue and negotiate away from violence and enmity.

for hizbushaitan, they want the void, thus it is in their interest that the presidency is vacant, thus insisting on aoun to be a president, which will never happen.
the net step is either of the following:
- a new taef where the shia will insist on dividing power in 3, or
- a civil war that will divide the country.

u need the civil war or at least civil unrest to get new constitution...
Le chaos createur...

What more do you want ya sayedna.....hakim already gave couple of solutions which include withdrawing from presidential race for someone else they agree on....I don't understand why you keep mentioning 14 march when addressing the issue...just name things exactly as they are and say it straight that March 8 baboon (aoun) is putting sticks in electing president.