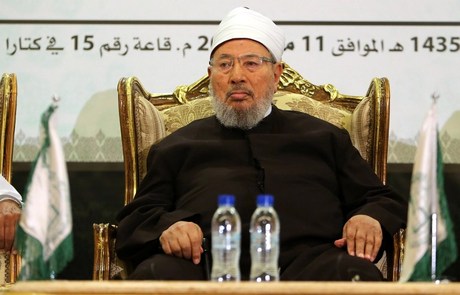 A union of Sunni Muslim clerics on Saturday criticized calls for Iraqi Shiites to fight a jihadist-led militant offensive in northern Iraq, which the body called a "Sunni revolution".

The Doha-based International Union of Muslim Scholars said developments in Iraq were a "result of oppression and exclusion of people that wanted freedom," in reference to the country's minority Sunni Arab community.

The union, which is led by influential cleric Yusef al-Qaradawi, who is linked to the Muslim Brotherhood, denounced "sectarian fatwa edicts calling for arms among our Shiite brothers" insisting they would lead to "devastating sectarian war."

"We urge our Shiite brothers in Iraq and elsewhere, and Sunnis, to avoid being the fuel for an awful sectarian war, and call on them to stand by their Sunni brothers to reach a viable solution," it said.

Thousands of Shiite volunteers have reportedly signed up after revered Shiite cleric Grand Ayatollah Ali al-Sistani called on Iraqis to join the fight against the militants.

A major offensive, spearheaded by powerful jihadist group the Islamic State of Iraq and the Levant but also involving late dictator Saddam Hussein's supporters, has overrun a large chunk of northern and north-central Iraq since Monday.

The clerical union said the insurgency "could not have been led by one Islamist party," a reference to ISIL, instead describing it as a "all-out Sunni revolution."

"This is not a revolution against the Shiites. It is aimed at recovering legitimate rights," it said, calling for the formation of a "national unity government."

This time I agree with you, they are filthy terrorist who want to destroy holy places and kill innocent peoples, and impose their narrow sectarian agenda on all the Iraqis from all religious or linguistic backgrounds.

But acknowledge these Sunni extremists are not that different from Hizbullah extremists who kill, beat and torture those who oppose their hegemony.

Looks like Qaradawi is a terrorist supporter. No surprise here.

They're both (ISIS & Kharadawi) financed by the same Gulf Abe monkeys so he has two stand by is own....HAMDILLAH the vast majority of my REAL Sunni brothers see these criminals for who they really are!

7ayartouna ma3kon! I am half shiite and half sunni. The truth is that the extremists salafis (not the majority of the sunni sect) has been bombing and killing shiite since before 2003 in Iraq, Afghanistan, Pakistan and wherever they are just because of their believes. For instance, in 2006 they have destroyed their holiest shrine killing hundreds during prayers.
Since, on a weekly basis we hear about 20-30 innocent child, women and men being murdered by those terrorists. The destroyed christian churches and shiite moslem mosques.

For god sake moderate and liberal sunnis, please wake-up. The shia has been in the defensive for a long time. They have been trying their best to avoid a civil war. Once, they attack back when the stakes and risks is high, they will have no choice to hit back and hard.

This is not cause by the Syria war. This is nothing new.

Continued..
It is a matter of logic, when someone feels threatened and capable of defending himself or herself, they wouldn't hesitate.

Excuse my typos. I should have reviewed my comments before posting:)