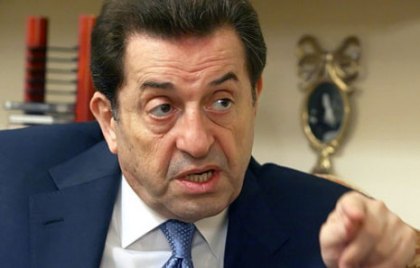 “Hizbullah is contributing to the presidential deadlock, while the real reason behind the crisis is Michel Aoun,” Harb said in an interview with the Kuwaiti daily al-Anbaa.

He considered that the March 14 alliance is practicing its freedom and constitutional right by attending all parliamentary sessions set to elect a new head of state.

“Obstructing the presidential poll violates democracy and unwillingness to participate in parliamentary sessions violates the constitutions,” Harb pointed out.

He described Speaker Nabih Berri's stance as “proper,” saying: “He is calling for new sessions and attending them despite all the threats surrounding him and his -Development and Liberation- parliamentary bloc is also attending.”

Harb didn't expect any new development in the upcoming session set for June 18.

Asked if he is a candidate for presidency post, the March 14 official said that he didn't submit his nomination because his “name poses itself” as a candidate.

Harb rejected to ask a foreign country to facilitate the presidential crisis, expressing fear of holding a constituent assembly during “inappropriate circumstances.”

“It will be a disaster and a miscalculated adventure,” the minister said.

On the possibility of staging parliamentary polls ahead of electing a new head of state, the official stressed on the importance of carrying out presidential elections first.

“Some parties are trying to distract the people's attention from the presidential vacuum on purpose,” Harb warned.

He told al-Anbaa newspaper that “the solution is in electing a new president.”

Harb said that the government could assume the tasks of the president but not all of them.

“If the cabinet assumes all of its responsibilities it's an indication that the presence of a president is worthless... Which is wrong,” he concluded.

A row among the parties rose in the cabinet over a mechanism regulating the government’s work during the ongoing presidential vacuum thus ending the last three sessions without any consensus.

Yes Harb, blame everyone but your fat self.

his group attended the vote, did yours ?

You dislike him because he nailed down the Hizbollah members who tried to assassinate him?