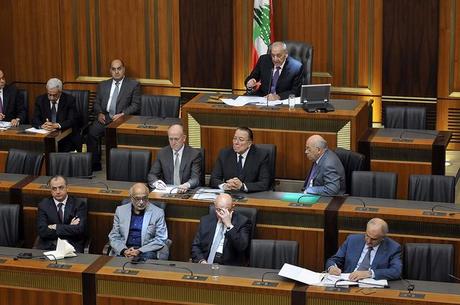 Speaker Nabih Berri considered on Monday that cooperation between the state institutions doesn't compel the obstruction of all powers if vacuum hits a certain post.

Berri in comments published in As Safir newspaper wondered if “some parties are mulling to adopt a new definition of cooperation” among state powers.

Another sharp debate over parliamentary sessions surfaced as Christian parties' decided to boycott legislative sessions until the election of a new head of state.

Asked about the new wage scale draft-law, Berri said that the suggestion he proposed to head of al-Mustaqbal parliamentary bloc is “realistic and secures balance between the state's income and expenditures.”

“There's no justification for any further delay.”

The Mustaqbal Movement boycotted legislative sessions aimed at discussing a wage scale for the public sector, warning that endorsing the draft-law would have negative repercussions on the country's economy.

WRONG, MR. BERRI, WRONG! It is part of the confessional power sharing formula by which Sunni's have the Prime Ministership, Christians the Presidency and Nabi Berri the Speaker's Chair. The Chair of the Speaker in the hands of the Shia is illegitimate, if there is no Maronite in the Presidential Chair and a Sunni in the PM Chair. And the formula is completely interchangeable, so that the Maronite President cannot perform his duties without a Shia in the Speaker's Chair and so forth.
To say that the Government goes on without its Christian component is a breach of the covenant by which Lebanon is governed and a delegitimization of the Shia reservation of the Speakers Chair to Nabi Berri.