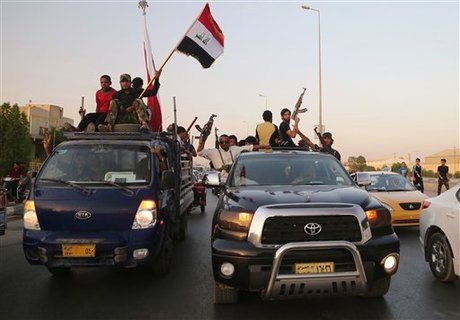 Militants battled security forces for control of a strategic Shiite town in north Iraq Monday, forcing half the area's population to flee as Washington weighed drone strikes against jihadist fighters leading the charge.

U.S. Secretary of State John Kerry also said he was open to cooperating with arch-foe Iran to resolve the week-long crisis which has spurred the United States and Australian embassies to begin evacuating some staff.

Militants from the Islamic State of Iraq and the Levant (ISIL) jihadist group are said to have killed scores of Iraqi soldiers as they pushed an advance on the capital, including in a "horrifying" massacre that has drawn international condemnation.

In the latest fighting on Monday, militants entered and took control of several neighborhoods of Tal Afar, a Shiite Turkman-majority town in Nineveh province, according to officials and residents.

Abdulal Abbas, the local official responsible for the town and surrounding area, said Tal Afar was dealing with "martyrs, wounded, chaos and refugees," and that around 200,000 people -- nearly half the area's population -- had fled to nearby areas.

The town, which lies near the Syrian border in otherwise Sunni Arab and Kurdish-dominated Nineveh province, had briefly held off a militant offensive that saw fighters led by ISIL take control of vast swathes of territory north of Baghdad in a matter of days.

Militants also took control of the Al-Adhim area, in Diyala province, north of Baghdad, on Sunday.

Kerry said on Monday that drone strikes were an option in combating the offensive, after U.S. President Barack Obama said he was weighing "all options" on how to support the Iraqi government.

Drones might not be the "whole answer," Washington's top diplomat told Yahoo News, "but they may well be one of the options that are important to be able to stem the tide and stop the movement of people who are moving around in open convoys and trucks and terrorising people."

Washington has already deployed an aircraft carrier to the Gulf, but Obama has ruled out a return to Iraq for U.S. soldiers, who left the country at the end of 2011 after a bloody and costly intervention launched in 2003.

The U.S. and Iran have also raised the possibility of working together over the crisis -- with Kerry saying he would be open to cooperating with Tehran, just days after Iranian President Hassan Rouhani said his country may "think about" cooperating with Washington.

The Wall Street Journal reported, citing U.S. officials, that the Obama administration may use nuclear talks starting in Vienna on Monday as a venue.

The sweeping unrest has prompted a partial diplomatic evacuation from Baghdad, confirmed thus far by the United States and Australia. France, meanwhile, said some non-essential staff had been moved to Paris.

Washington also announced that its sprawling embassy -- which sits in Baghdad's heavily-fortified Green Zone -- would receive even more security.

The Iraqi government insists it is making progress in retaking territory from militants, who currently hold most or parts of four provinces north of Baghdad.

It said on Sunday that security forces had killed 279 militants and that soldiers have recaptured towns north of Baghdad.

The toll could not be independently confirmed, and Iraqi officials often tout high numbers of militant deaths while downplaying their own casualties.

As troops began to push back against militants, evidence of brutal violence against members of the security forces emerged.

The U.S. condemned a massacre in which ISIL militants appear to have killed scores of soldiers around the conflict-hit city of Tikrit, while the burned bodies of 12 policemen were also found in the town of Ishaqi.

Photos posted online were said to show jihadists summarily executing dozens of captured members of the security forces in Salaheddin province, of which Tikrit is the capital, with tweets attributed to ISIL claiming they had killed 1,700 in all.

The photos and the claims could not be independently verified.

"The claim ... is horrifying and a true depiction of the bloodlust that these terrorists represent," State Department spokeswoman Jen Psaki said.

The international outcry came as the crisis entered its second week.

After days of unrest elsewhere in the Sunni Arab-majority north and west of Iraq, militants launched an assault on the country's second-biggest city Mosul on June 9, and swiftly moved down to Tikrit, executed dictator Saddam Hussein's hometown.

Iraqi forces performed poorly early on, abandoning vehicles and positions and discarding their uniforms, with militants reaching within less than 100 kilometers (60 miles) of Baghdad.

Baghdad's embattled forces, which have done better in recent days, will be joined by a flood of volunteers after a call to arms from top Shiite cleric Grand Ayatollah Ali al-Sistani, but a recruitment center for volunteers came under attack on Sunday, leaving six people dead.

This uprising is a direct convenience of Iran carefully planned imperialist policies in the region extending from Lebanon to Afghanistan. Shia versus Sunni. KSA and other gulf countries are in the hart if the battle supporting be it daesh or other Sunni groups against the hostile policies against the Sunni be it in Syria, Lebanon (tripoli) and now in Irak.
No one will win of course but every body will lose. It is a big shame that people do not know but the language of hegemony.

are u denying that shias are ruling lebanon and iraq, while alawites rule syria ?

To paralysis; idiots of your kind are rare to find.Few Da3esh, iran raised, terrorists 3-7000 can make all this mess to shi3a army? And you are talking about sunni? In any case sunnis are not in need to do as much as you. They are not affraid like you are.

The USA warmonger is considering military action against ISIL, strange. Falmethrower and his aliases always say the USA supports and funds ISIL and AL Qaeda:)

No one will presumably be around.

Sunni this, Shiite that. 3ayb 3aleykoun. We are Lebanese, we're supposed to be better than the rest of the arabs, and more tolerant and modern.

i totally agree with you bigjohn!

That's a different story. Noone is arguing that the sectarian system is right, but what I'm saying is that the Lebanese have been living together for centuries, and this sectarian talk is shameful.

Indeed sectarianism is racism. Apartheid. And what is happening in the region today is the most revolting thing ever.
Sectarianism and death go hand in hand. Israel wants the world to recognize it as a Jewish state. Lebanon has 3 "presidencies", Christian, Shiite and Sunni. Hezbollah is an exclusively Shiite party that promotes Shiite "religious national socialism". The other parties are mono-sectarian but include members of other sects.
Syria and Iraq have imploded into a very violent and ugly sectarian conflict. Iran, Saudi Arabia and Qatar are promoting their sectarian champions.

Ugly sectarianism is a plague sweeping our region. It is a shame but many have died in the name of their sect and many more will die until we develop political, judicial and cultural systems that will make us immune to this deadly virus.
Meanwhile, we should come down hard on those extremists promoting it with violence.