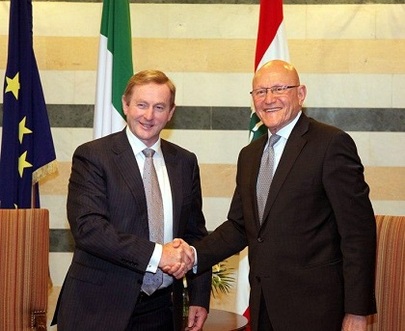 It said Kenny told Salam during a meeting at the Grand Serail, which lasted around two hours, that Ireland would grant the UNHCR and UNRWA 2 million euros.

Half of the assistance would go to UNHCR's efforts to provide assistance to poor Lebanese communities who are hosting Syrian refugees, said the statement.

There are more than 1 million displaced Syrians in Lebanon. Most of them are residing with relatives and have sought shelter in encampments.

The UNHCR said Monday that more than 9,900 registered as refugees in the past week, raising the total number of refugees escaping the fighting in Syria to 1,100,486.

Ireland has already provided the Lebanese government with 1.74 million euros to help it cope with the burden of refugees who are in desperate need of housing, education and medical care.

According to the statement, Kenny praised the Lebanese government and people for helping the displaced Syrians.

He will later lay a wreath at the memorial for the 47 Irish soldiers who died serving in Lebanon since 1978.

Kenny's visit is the first time an Irish prime minister has visited the troops in Lebanon since Bertie Ahern visited in 1999.

They need another couple of billions just to eat for a month !

And how much did you give? Ireland is a country in turmoil and they still have enough decency to send what they can.

The IMF doesn't work on begging, amd the Irish are coming out of the recession because they are united and hard working and love their country