U.S., Iran May Use Nuclear Talks to Discuss Iraq without Military Action Consultation 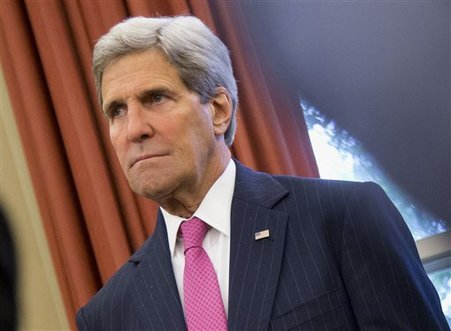 The United States has no plans to consult Iran on any potential military action in Iraq, the Pentagon said Monday, but left the door open to diplomatic discussions on the crisis.

Pentagon spokesman Rear Admiral John Kirby said "there is absolutely no intention, no plan to coordinate military activities between the United States and Iran."

U.S. and Iranian diplomats might, however, address the situation in Iraq on the margins of negotiations on Tehran's nuclear program, which will take place this week in Vienna, Kirby told reporters.

"It's possible on the sideline of those discussions, there could be discussions surrounding the situation in Iraq," he said.

"It's not without precedent that we speak about security issues with Iran. There were discussions about Afghanistan with Iran in the not too distant past," said Kirby, an apparent reference to talks with Tehran prior to the U.S.-led invasion of Afghanistan in 2001.

But he added: "There are no plans to consult Iran about military activities inside Iraq."

Kirby said the United States has encouraged Iran and other neighboring countries to "play a constructive role" and respect Iraq's "territorial sovereignty."

The Pentagon's comments came after Secretary of State John Kerry triggered speculation about potential U.S.-Iran military cooperation in an interview with Yahoo News.

"I wouldn't rule out anything that would be constructive," Kerry said when asked if the United States would cooperate militarily with its traditional foe Iran.

Kerry said time would tell what Iran would be ready to do on behalf of its allies in the Shiite-led government in Baghdad.

"Let's see what Iran might or might not be willing to do before we start making any pronouncements," Kerry said.

But State Department spokeswoman Jen Psaki urged Iran to act "in a non-sectarian way" as it engages in the security crisis in Iraq.

In recent years, Washington has usually demanded that Iran not meddle in the situation in Iraq, but last week's shock gains by Sunni rebels have left Baghdad appealing for outside help.

"We would push Iran to address problems in a non-sectarian way," Psaki said.

She said there was a "possibility" that the United States and Iran could hold bilateral talks on Iraq in Vienna.

But she stressed the United States was "not talking about coordinating any military action in Iraq with Iran."

Psaki also made clear Washington did not support an Iranian military presence in Iraq.

"We don't feel it's useful for the Iraqis to rely on the capacity of Iran's security forces," she said.

She also stressed that even as Washington sought to work with Iran, much as the two countries did after the ousting of the Taliban in Afghanistan in 2001, there were still U.S. concerns about Tehran, which is branded as a state sponsor of terrorism.

"We think... it could be an opportunity, but beyond that it hasn't changed our concerns about a variety of issues in Iran," Psaki said.

"We have still existing, strong concerns about terrorist activity, about our detained American citizens who are there, steps they need to take even as a part of the P-5 plus one negotiations here."

The United States and Iran, who have been bitter foes for over 30 years, are both deeply concerned by a major insurgency by Sunni militants who have overrun swathes of Iraq over the past week.

The lightning advance of extremists from the Islamic State of Iraq and the Levant (ISIL) across Iraq, including the capture of Mosul, has alarmed both Tehran and Washington.

Both governments, for their own reasons, oppose the rise of the Sunni jihadists and have a common interest in seeing the Baghdad government fend off the onslaught.

ISIL's offensive has raised fears of a new sectarian civil war between Sunnis and Shiites in the country from which US forces withdrew in December 2011.

A senior U.S. administration official said that as a result "there may be some conversations" with Iranian negotiators on the sidelines of nuclear talks between Iran and six world powers in Vienna on Monday.

Zarif was a key interlocutor between Shiite Iran and the U.S. government after the September 11, 2001 attacks, when both sides were keen to oust the hardline Sunni Muslim Taliban in Afghanistan.

"The U.S. and Iran discussed Afghanistan .. so from time to time there have been times where it makes sense to be part of a conversation," the U.S. official said.

"But I think that the fundamentals remain as they are, which is that until we resolve the nuclear issue there cannot be any kind of fundamental change in this relationship," she said.

The main focus in the Austrian capital remains however efforts towards a nuclear deal with only five weeks before a July 20 deadline to sign on the dotted line.

The five permanent members of the U.N. Security Council plus Germany want Tehran to scale back its nuclear activities, while Iran wants all U.N. and Western sanctions to be lifted.

This long hoped-for accord would aim to once and for all silence fears that Tehran might develop nuclear weapons, and avert a slide into international conflict.

Both sides caution that there is a long way to go as negotiators confront the same sticking points that have dogged diplomatic efforts for the past decade.

The senior U.S. official said however that contrary to the general assessment by experts, both sides actually began to draft a deal at their last meeting in May.

"A little bit of that was done the last time, and it was expected more will take place during this round," the official said.

She added that in U.S.-Iranian bilateral talks last week, both sides "not only understood each other better ... but I think we both can see places where we might be able to close the gaps".

The many thorny issues to be resolved in what would be a fiendishly complex deal include the duration of the mooted accord and the pace of sanctions relief.

But the gorilla in the room remains uranium enrichment, a process that can produce nuclear fuel but also, when highly purified, the core of an atomic bomb.

Iran wants to massively increase the number of centrifuges -- the machines that enrich -- saying it needs them to produce the fuel for a future fleet of civilian nuclear plants.

The West says these are years if not decades away from being built, fearing that Iran's real aim is to use its centrifuges to enrich uranium to weapons-grade -- -- something Tehran denies.

French Foreign Minister Laurent Fabius said last week that the West wants Iran to slash the number of centrifuges to "several hundred" from 20,000 now, of which 10,000 are operating.

"We are not even in the same ballpark," said Fabius.

Under an interim deal struck in November, Iran agreed to freeze certain nuclear activities for six months in return for minor sanctions relief.

This comes to an end on July 20 but it can be renewed -- if both sides agree. Experts say such an extension is likely already under discussion.

The senior U.S. official said however denied this, saying negotiators are "not having discussions now" about such a move.

U.S. President Barack Obama would much prefer to get a deal by July 20 in order to fend off accusations that Iran is merely buying time ahead of midterm U.S. elections in November.

"It will be in the interest of everyone if a deal is signed in the next five weeks," Iranian President Hassan Rouhani said on Saturday.

Any discussion to burn the cannibal terrorists is appropriate.

@Texy.."Does Taqyia include twisting facts" LMAOOOO Yes yes Taqyia EVERYWHERE! The only argument M14er can fall back on when all bases of logic and evidence all apart! Are u where a tinfoil hat as we speak texy? Are little green man from mars probing u? Btw I own the brooklyn bridge would u like to buy it for a $1? LOL Have a nice day dum dum :)

Texy!!once again this was a genius statement out of you my dearest Wahhabi Organ Eater supporter. The mental abilities of you this internet warrior should be the standard bearer of all democratic, freedom loving Wahhabi's when engaging in debate. My continued experience in your intellectual retort makes any rebuttal futile. Truly your IQ and mind must be studied for generations to come...Takbir!

what a fun we are witnessing! USA and iran nearly allies! i bet M8ers will now change their discourse and say how nice the US are! wahahaha! just southern gave us a glimpse of how stupid M8ers are! from spitting on the US to telling them thank you now! hahaha! and without even being ashamed!

Peace the the oil snake salesman has spoken y'all! Have a nice day you consistent LOSERS :)

thank you for this lesson in history... i know it but you refer to it only when it suits you... that is what makes you a stupid brainwashed fanatic... but even if this alliance is temporary, the fact remains you are allying the ones you spit on... how is that for sticking to your principles! LOL

we know that M8ers always go where their interests are even if it means to sell their soul...in this case to the great satan hahaha! you are pityful and sick... no respectable whatsoever coward sissy...

sure they are sending their warships to help hezbis and iran... bravo, now you are ally with the USA...wahahahaha!

oh!!! sissy boy coming to rescue his boyfriends... how cute this gathering of braindead people.... you seem agitated and nervous... is it because your US friends come to help your masters? i know it is already difficult to assume that the US are helping bashar to stay on his throne but now they are also hepling iran?
your brain is bugging it seems... you cannot understand a thing now!

keep up the insults... it is the only thing you are good at!!!! subhuman parasite....

We are good with Iran handling the situation in Iraq and whatever comes out of it. Just leave the U.S. alone. Please keep your wars between Iran and Iraq or in Syria, and don't get Lebanon involved. Finally, good luck.