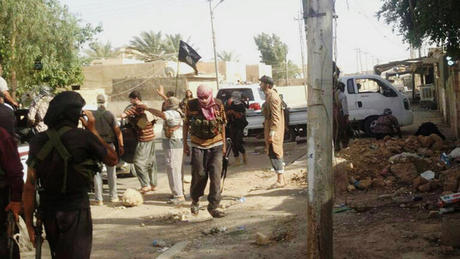 Fighting erupted at the northern approaches to Baghdad Tuesday as militants seized most of a key Shiite majority town in northern Iraq and parts of the central city of Baquba.

Meanwhile, Prime Minister Nouri al-Maliki dismissed several senior security force commanders in the face of the week-old militant offensive that has overrun swathes of the country.

Those dismissed included the top commander for the northern province of Nineveh, the first to fall in the assault, which has since driven south towards the capital.

Washington meanwhile deployed some 275 military personnel to protect its embassy in Baghdad, the first time it has sent troops to Iraq since it withdrew its forces at the end of 2011 after a bloody and costly intervention launched in 2003.

It was also mulling air strikes against the militants, who are led by the jihadist Islamic State of Iraq and the Levant (ISIL) but include loyalists of now-executed Sunni Arab strongman Saddam Hussein.

A relative calm in Baghdad -- ostensibly as militants have focused on their northern assault -- was shattered by a string of bombings that left 17 people dead, while the bodies of 18 soldiers and police were found near the city of Samarra, all shot in the head and chest.

The dead soldiers and police were found in an area 15 kilometers (nine miles) east of Samarra.

They had suffered gunshots to the head and chest, but it was unclear if they were executed or killed in fighting.

Since the insurgents launched their lightning assault on June 9, they have captured Mosul, a city of two million people, and a big chunk of mainly Sunni Arab territory stretching towards the capital.

The offensive has displaced hundreds of thousands of people and sent jitters through world oil markets as the militants have advanced ever nearer Baghdad leaving the Shiite-led government in disarray.

Officials said on Tuesday that militants briefly held parts of the city of Baquba, just 60 kilometers (40 miles) from the capital.

They also took control of most of Tal Afar, a strategic Shiite-majority town between Mosul and the border with Syria, where ISIL also has fighters engaged in that country's three-year-old civil war.

The overnight attack on Baquba, which was pushed back by security forces but left 44 prisoners dead at a police station, marked the closest that fighting has come to the capital.

In Tal Afar, militants controlled most of the town but pockets of resistance remained.

Further south, security personnel abandoned the Iraqi side of a key crossing on the border with Syria, officers said.

Syrian rebel groups opposed to ISIL, who already controlled the other side of the al-Qaim crossing, advanced across the border to take over.

A cameraman was also killed and a correspondent wounded while covering the unrest, their television channel said.

Alarmed by the collapse of much of the security forces in the face of the militant advance, foreign governments have begun pulling out diplomatic staff.

U.S. President Barack Obama announced that around 275 military personnel "equipped for combat" were being deployed to Iraq to help protect the embassy in Baghdad and assist U.S. nationals.

Washington has already deployed an aircraft carrier to the Gulf, but Obama has ruled out a return to combat in Iraq for U.S. soldiers.

As the U.S. weighed its next move, Secretary of State John Kerry said on Monday that drone strikes could be used.

Washington has ruled out cooperating militarily with Tehran, but the two governments -- which have been bitter foes for more than 30 years -- held "brief discussions" on the crisis in Vienna.

Drones have been used by the U.S. against militants in Afghanistan, Pakistan and Yemen, but have been criticized by human rights groups for their heavy civilian toll.

Doubts are growing that the Iraqi security forces can hold back the militant tide, despite military commanders trumpeting a counter-offensive.

Soldiers and police fled en masse as the insurgents swept into Iraq's second city of Mosul a week ago, abandoning their vehicles and uniforms.

The jihadists are said to have killed scores of Iraqi soldiers as they pushed their advance, including in a "horrifying" massacre in Salaheddin province that has drawn international condemnation.

Top Shiite cleric Grand Ayatollah Ali al-Sistani has called for volunteers to join the battle against the militants and thousands have signed up.

More have returned home from neighboring Syria, where they had been fighting alongside government forces against mainly Sunni rebels there, a monitoring group said.

so a province of a million plus falls over night to 500 militants? Can anyone make any sense of this? And no one saw this coming?

Why are they referred to as "militants"? Why not "terrorists"?