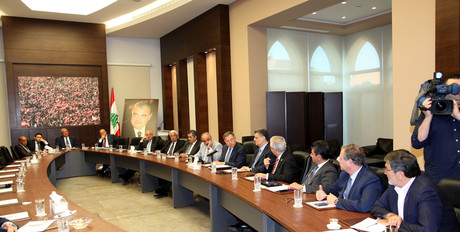 Al-Mustaqbal bloc on Tuesday called on the cabinet to take charge of people's affairs, urging also the election of a new head of state “as soon as possible.”

"It is not acceptable to continue stalling amid vacuum in the state's top post,” the bloc said in a released statement after the MPs' weekly meeting at the Center House.

The bloc stated that the solution lies in the hands “of those obstructing the (presidential) juncture, i.e. the March 8 coalition, who are boycotting electoral sessions.”

"The March 14 forces have announced that their candidate is (Lebanese Forces chief) Samir Geagea and instead of boycotting sessions, March 8 should take the same road and agree on a consensual name who could become a symbol for the country's unity and independence, and who could respect the state's sovereignty and the conclusions of the national dialogue sessions,” the statement said.

On the cabinet's role amid the current presidential vacuum, the statement said: “We stress an accurate implementation of the Constitution while attending the interest of people, the state and the economy.”

Separately, the MPs commented on the contentious new wage scale, saying they are open to discuss any proposal that leads to the long-awaited adoption of the draft.

They stressed the bloc's stance of siding with “the real and constant interests of employees, workers, teachers, and military and security personnel.”

The bloc said it was keen on securing a decent livelihood for people, but highlighted that it should be based on “fairness between different sectors and between costs and expected revenues.”

The lawmakers pointed out that "this issue requires more than estimating the treasury's ability to bear the additional costs," as it should also explore "the economy's capacity to bear additional tax burdens and to contain its negative consequences."

But the conferees assured that they are open to discuss any proposal that takes the aforementioned conditions into consideration, and which leads to the adoption of the new wage scale.